The Lives of 800,000 DACA Recipients are Now in the Hands of the Supreme Court  - People For the American Way
Skip to main content 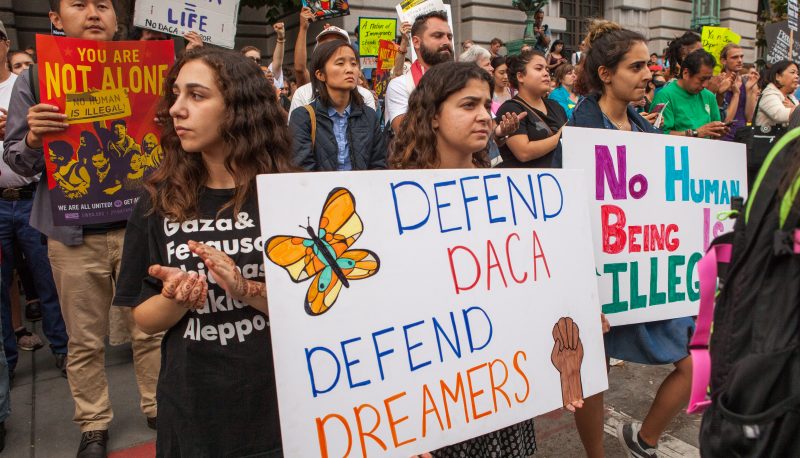 Trump’s Anti-Immigrant Policies are Everything he Promised

Nearly 800,000 young immigrants protected by the Deferred Action for Childhood Arrivals program (“DACA”) have been living in political limbo for years under a unique status that safeguards them from the immediate threat of deportation without a pathway to citizenship or clear future protections. After years of turmoil between the executive and legislative branches, the Supreme Court announced on June 29 that it would hear an appeal of the lower court decisions that barred the Trump administration from ending DACA.

DACA was first established by President Obama in 2012 after a series of failed attempts by Congress to protect young, undocumented immigrants through legislation. This executive order was met with great hostility on both sides of the aisle, as some claimed it was an overstep of power by the executive branch while others argued it had not gone far enough to provide immigrants needed security.

In reality, DACA provided a very narrow umbrella of safety to a select class of undocumented immigrants who were required to meet a vast and unforgiving number of conditions to be eligible. Even those who did qualify faced a number of obstacles in obtaining legal status. Recipients were required to disclose vast amounts of personal information about themselves and their families, undergo extreme background checks, pay hefty legal and administrative fees, and often report to USCIS facilities for processing. This was all with the understanding that the status they obtained would never lead to citizenship, would have to be periodically renewed, and left them vulnerable to future scrutiny if the political climate were to ever shift.

Still, DACA drastically improved the lives of those who did qualify for the program. After a lifetime of living in the shadows, DACA allowed many young immigrants to obtain work authorization, qualify for funding to attend college, receive a social security number, and live—even if only temporarily—without immediate fear of deportation. Polling showed that the majority of Americans supported these protections, and for a while, it seemed as though the country was moving toward a place where it could extend some measure of safeguards to DACA recipients and maybe eventually provide them a pathway to citizenship. Of course, all of this changed during the Trump administration.

Immediately after Donald Trump launched his campaign, he capitalized on the bigotry of his base by frequently spewing anti-immigrant rhetoric and proposing radical—and often irrational and unconstitutional—changes to our immigration system. Unfortunately, DACA recipients and their families were an early target in his campaign of alienation and fearmongering as he vowed to undo the protections first offered by President Obama and implement harsh policies that would ultimately result in the anti-DACA deportation.

For a brief period of time after Trump took office, it appeared as though his crusade against DACA recipients fell to the wayside as he targeted other immigrant groups with policies like narrowing classes of asylum seekers, limiting the number of refugee visas, barring entry of certain immigrants through the anti-Muslim travel ban, and implementing a policy of family separation at the border. Although his approach to immigration as a whole demonstrated his backward thinking and general intolerance, his rhetoric on DACA recipients specifically seemed to soften and fall to the background of his agenda.

This changed in the fall of 2017 when a group of conservative state attorneys general sparked criticism of Trump from his base after they threatened to sue the administration if Trump failed to end the DACA program, claiming Trump was violating the separation of powers between branches by allowing the program to remain in place. Against the advice of many of his advisors and lawmakers on both sides of the aisle, Trump impulsively vowed that he would end DACA and gave Congress a six-month period to reinstate this policy through legislation. Once again, 800,000 young immigrants faced turmoil as the threat of imminent deportation was back on the table if the government failed to act.

The urgency to pass protective legislation was relieved almost immediately when various lawsuits to protect DACA were brought throughout the country by activist groups and recipients. The administration’s argument in these cases generally centered on the supposed illegality of Obama’s executive order and cited an appeals court in Texas that had found another program, the Deferred Action for Parents of Americans (“DAPA”), to be unconstitutional. DAPA, which sought to provide status to parents of immigrant children, had gone to the Supreme Court the year before and divided the justices evenly down the middle, which meant that it had no precedential value outside the jurisdiction of the lower court, and the ruling itself had not addressed DACA at all.

A district court judge in California struck down the logic in the administration’s defense, and quickly granted a nationwide injunction to block Trump’s decision to end DACA. Before the appeals court even had time to review, the Trump administration petitioned the Supreme Court to take up the case, arguing for expedited review on the basis that the issue would inevitably end up in front of the justices anyway. The Supreme Court denied this initial petition and sent the case back down to the Ninth Circuit.

Shortly after the administration’s petition for expedited review was denied, a three-judge panel of the Ninth Circuit upheld the district court’s ruling, reasoning that the rescission of the program had overstepped the Immigration and Naturalization Act and the Administrative Procedure Act by failing to present the decision as a clear, justified policy choice, and stated that eliminating DACA was never legal. One judge specifically indicated that he believed the Trump administration had acted in a way that was solely intended to display anti-Latinx hostility, therefore violating the Equal Protection Clause. Shortly after this decision, two additional appeals courts released similar rulings in favor of DACA.

The administration again petitioned the Supreme Court to take up the issue, asking the justices to determine whether the decision to end DACA is the kind of action the Court has authority to review, and if so, whether the decision to end the program was legal. This time, the justices said that the case was ripe for review and agreed to hear it next term. The three appeals court cases will be combined and argued together in the fall of 2019 and decided by the end of June 2020.

In the meantime, the future of DACA and those who benefit from the program remains vulnerable at best. There is some hope for a positive ruling, particularly after last month’s decision regarding the census citizenship question where Justice Roberts specifically stated that “the evidence tells a story that does not match the explanation [Commerce Secretary Wilbur Ross] gave for his decision,” and that the rationale behind including the question seemed to be “contrived.” All of this could signal some hope for cases involving immigration policy, particularly on the issues of DACA where the Ninth Circuit has already laid the groundwork by calling the administration’s motivation behind the program’s rescission into question.

However, with Trump’s ultra-conservative Supreme Court majority, it’s difficult to be optimistic about the future of immigration policy and the fate of DACA. This decision serves as another reminder that elections have consequences, courts matter, and that every voter should consider the Supreme Court when casting a vote in 2020.