This weekend in Charlottesville, Va., the world witnessed something that has always been part of America but is not always so flagrantly on display: deeply-rooted white supremacy and hatred in the form of the largest gathering of white supremacists in more than a decade. Then we watched the president defend white supremacy, hate and violence. Neo-Nazis and white supremacists like Duke celebrated Trump’s words yesterday and are already planning more events in the future. 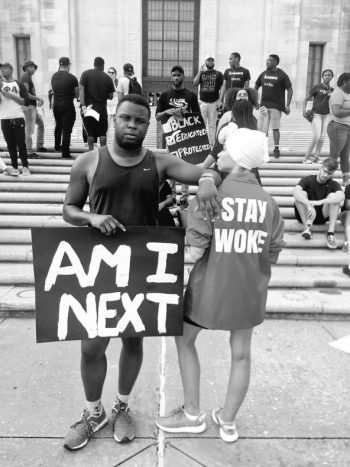 It is time to call out the people who support an administration that has emboldened these figures and continues to attack black communities. My question to anyone who helps fuel this man and his racist agenda: What side of history do you want to be on?

This administration continues to push its extreme agenda and use hate to support it, which it has done from the beginning. Last year around this time, Donald Trump spoke on how black communities had nothing to lose by voting for him. He pushed bogus “statistics” painting black people as criminals and called black communities “war zones.” He used hate and fear of people of color to bolster his campaign and provided a platform for white supremacists to grow in power.

And it’s still happening. A few weeks ago, Trump encouraged law enforcement to roughen up “thugs.” He told police not to be “too nice” to “thugs being thrown into the back of a paddy wagon.” This kind of rhetoric has real consequences. When he said that, I thought about one of my own encounters with the police.

As I previously wrote:

I ended up graduating at the top of my class in the largest high school in Louisiana. My friends and I decided to celebrate, and my dad let me take his new car out. While driving to meet my friends, I was stopped on suspicion of being in a stolen vehicle and possible drunk driving. I was arrested on the spot — they didn’t even offer me a chance to take a breathalyzer test until I got to the station. I blew a 0.00 — I hadn’t had anything to drink. The officer brought me back to my car and I didn’t get a ticket. I was one of the lucky ones, I thought. After all, I walked away unhurt. I walked away.

During the campaigns last year, working for Bernie Sanders and then Hillary Clinton, people asked me why I was so involved. I did it because I knew the threat of a racist president in office would open a new form of hate that has been waiting to sprout up again. That is exactly what has happened.

My ancestors were slaves. People who have never been racially profiled often talk about racism like it’s over, a thing of the past. It isn’t. My family members were beaten for marching for their civil rights. I know the stories that have been passed down from generation to generation — my people being hanged and killed in the night for being black. We are strong people. We will continue to fight. We are in the fight our lives.

But when people like Donald Trump don’t call out white supremacy, racism, and hate, a piece of my heart aches.

This administration does not have the best interest in mind of anyone but privileged white people. Trump had multiple opportunities to denounce white supremacy and neo-Nazis, and he wouldn’t do it without heavy pressure from all sides. Trump failed yet again to protect communities that need it most and opened up a box of hate. I will continue to resist this administration that helps fuel white supremacists.

Enough is enough. We have to stand up, speak out, and fight back like our ancestors have, like Heather Heyer and other heroes have. We are in a new civil rights era. Our lives are on the line. I will continue to fight until the day I die, because too much is at stake: now under the current administration, and in the years to come.