Last night, Donald Trump signed an executive order dissolving his sham ‘election integrity’ commission. This is a BIG win and you were a big part of it. Thank you!

Throughout 2017, PFAW and our members like you fought back hard against this commission, which was set up not to address any real problems with our elections but rather to prop up the total myth of rampant illegal voting. The purpose of the commission was to elevate right-wing conspiracy theories about illegal voting as the excuse for Trump’s loss in the popular vote to Hillary Clinton by 3 million votes and to set the stage for a new wave of voter suppression nationwide, by way of voter roll purges and policies like narrow ID requirements that put barriers between eligible voters and the ballot box.

The commission was co-chaired by Mike Pence and perhaps the nation’s #1 voter suppression advocate, Kansas Secretary of State Kris Kobach. Others on the commission comprised a rogues’ gallery of notorious right-wing vote suppressors we’ve been tracking for years, including Hans von Spakovsky, J. Christian Adams, and Kenneth Blackwell.

As we said in our press statement last night, the commission “was a scam and a fraud from beginning to end. Its purpose was never to make elections stronger: it was to twist and distort the facts in order to help justify onerous new restrictions on the right to vote designed to help Republicans rig our democracy in their own favor.”

This victory is the product of YOUR activism and resistance.

More than 109,000 PFAW supporters took action online and offline to call for the commission to be disbanded, urge state officials to resist complying with the shady demands of the commission’s leaders, and urge elected officials to truly protect our elections by instead investigating the very real problem of voter suppression.

And, thanks to a generous major donor who put up half the money and a group of dedicated supporters like you who put up the other half, our nonpartisan affiliate PFAW Foundation ran a full page ad in the New York Times exposing the truth about the commission members. 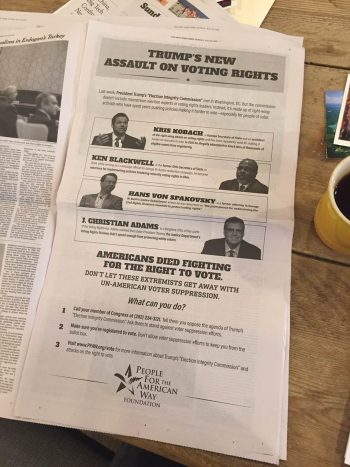 In addition, with YOUR support, we:

Our work is far from done.

This is a significant win but by no means an end to the relentless voter suppression by the Right. Their efforts will surely persist … Republicans will continue to try to rig the system to their advantage with dirty tricks and by trampling on Americans’ rights … Donald Trump is in the process of installing an extreme advocate of racial gerrymandering to head the 2020 census, indicating that Trump Republicans could be trying to turn the next census into a weapon against voting rights … and, just this morning, Trump was already tweeting that “many people are voting illegally” and urging his supporters to “push hard” for the kind of onerous voter ID laws that we know only undermine the right to vote and do not make our elections any more secure.

The Trump administration also is not ending its own witch hunt into Trump’s completely false claims of illegal voting … the work will continue under the Department of Homeland Security with Kris Kobach as an adviser.

According to the Times, “Mr. Kobach, who said he would remain as an informal adviser to homeland security, said the department would marshal its files on immigrants, legal and otherwise, so that they can be matched with lists of registered voters nationwide to detect foreign citizens who are illegally casting ballots in American elections.”

Kobach already has a disturbing record of egregiously sloppy database matching that has resulted in a terrifying number of false matches when it comes to identifying “illegal” voters … so we could be in store for a big mess and an urgent need to help lawful, eligible voters rectify erroneous attacks on their standing.

So we must remain vigilant. Together, we’ll keep fighting to PROTECT our elections and the right to vote.

THANK YOU for everything and congratulations on this important victory.