The Party of No Lives Up to Its Name

Last night, in the latest episode of their passive-aggressive crusade to keep President Obama’s judicial nominees off the bench, the Senate GOP put on a mind-boggling display of obstruction.

As the Senate confirmed Elena Kagan’s Supreme Court nomination, 21 other judicial nominees were waiting for Senate votes. More than half of these nominees had been approved unanimously by the Judiciary Committee, and all had been waiting more than 100 days for confirmation.

After the Kagan vote, Senate GOP leader Mitch McConnell agreed to hold voice votes on four of the stalled nominees, and promised to agree to a vote on another—Jane Stranch, a Tennessee attorney who has been waiting more than a year for confirmation, despite having the support of both of her home state’s Republican senators– in September.

The GOP sent five nominees back to the White House—meaning that the President will have to renominate them and start the process again.

That left eleven nominees in Senate limbo. Nine of them had received absolutely no opposition from either party in their Judiciary Committee hearings.

In an interview Monday, the National Journal asked McConnell about his party’s obstructionism. “Is the Senate broken?” the interviewer asked. McConnell answered:

No. Members frequently on both sides hold up a nominee because of some concern they have. It is more likely to be done if you are in the minority because the administration is not of your party and less likely to address your concern. This kind of give-and-take I have seen go on before. It is not any more dramatic now than it has been in the past, and this president has not been treated worse than the last one was. But it is always maddening to the majority and maddening to every president.

I must say the president even made it worse by recessing a guy like [Craig] Becker [to the National Labor Relations Board], who was defeated in the Senate. We had a vote. He was defeated on a bipartisan basis. And recessing a guy like [Donald] Berwick [to oversee Medicare and Medicaid] without any hearings at all and with the chairman of the Finance Committee [Max Baucus, D-Mont.] saying he didn’t think he should have been recessed. That is not the kind of action that is designed to, shall I say, engender a cooperative reaction on the part of the minority. I think we can statistically show you that it is not worse for President Obama. He hasn’t been singled out more for shoddy treatment than it has been in the past.

It’s unclear what “concern” McConnell is referring to in the case of the nine blocked nominees who have received absolutely no Republican opposition. The concern seems to have nothing to do with the nominees at all—but rather with unrelated executive branch nominations that the GOP is seeking revenge for.

And as for McConnell’s claim that “we can statistically show you that it is not worse for President Obama,” the Center for American Progress has a chart for that: 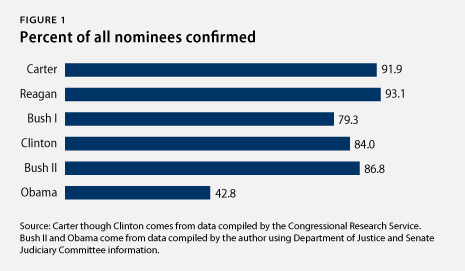