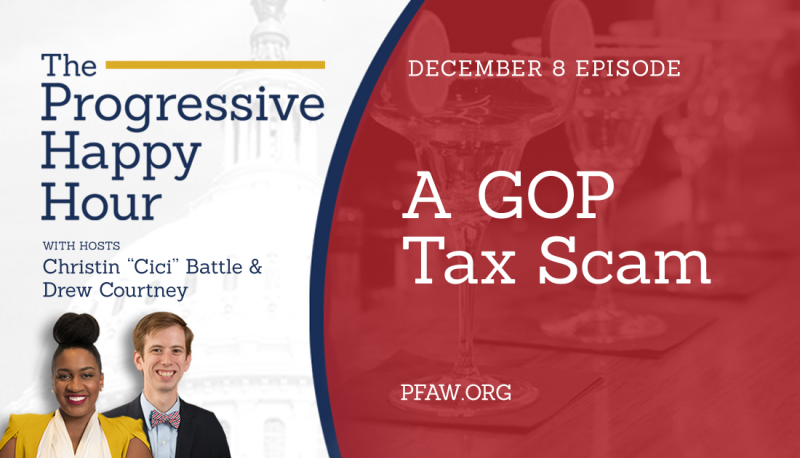 Last weekend Republican senators passed a cruel and immensely unpopular tax bill that steals from working people to give to the super-rich. In the December 8 episode of “The Progressive Happy Hour,” hosts Christin “Cici” Battle and Drew Courtney sit down with TJ Helmstetter, communications director of Americans for Tax Fairness, to get up to speed on the GOP tax scam and where we go from here.

“It’s taking money from working people and giving it to the ultra-wealthy and corporations,” TJ said. “Over 60 percent of the tax cuts are going to the richest one percent.”

TJ emphasized that even though versions of the bill have passed the House and Senate, this fight is not over—and the time to be reaching out to senators and representatives is now. “We’ve been focusing on a range of targets across the country, folks who we think could change their vote or folks who are in competitive districts who should be afraid for their own reelections because their constituents hate this bill,” he said. “This bill is massively unpopular, as all the polling shows.”

Also in this episode, Drew shares his recommendation for the gift-giving season: shop small and shop local.