The Progressive Happy Hour: Alex Jones, Technology and the Alt Right - People For the American Way
Skip to main content 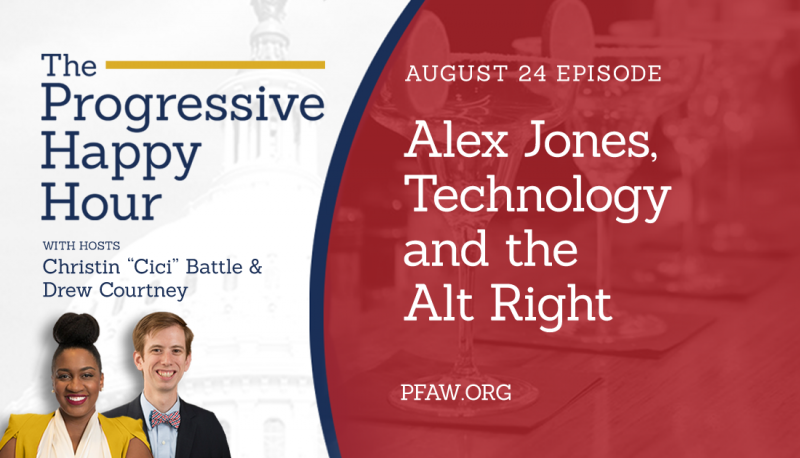 Earlier this month, hard-right conspiracy theorist Alex Jones lost his prominent online presence after Spotify, Google, YouTube, Apple and a slew of other tech companies banned his Infowars podcast from their sites for having violated their terms of service—reviving the national debate on how social media companies should evaluate and restrain the misuse and abuse of their powerful platforms.

In the August 24 episode of “The Progressive Happy Hour,” co-hosts Cici Battle and Drew Courtney catch up with Right Wing Watch’s Jared Holt, whose tweet helped to spark the Infowars bans, about his work researching the alt right, the movement’s dangerous intersection with technology and how social media companies might address and combat misinformation and violent rhetoric on their sites.

Holt explained that these technological platforms provide a natural place for people to coalesce and build powerful agendas. He noted, “The internet exists as a radical experiment in free speech. When it first came out, we saw a lot of the positives: the Arab Spring was an example of what unfettered access to global information can do for radical changes in democracy. But in recent years, we’ve seen the flip side of that: some of the uglier segments of society have also found a way to have a pronounced voice and enact political change on their own scales. The internet was naturally a fit for that kind of stuff.”

“After the 2016 election,” Holt continued, “places like YouTube and Facebook made a big song and dance about how they were going to fight misinformation and lessen ‘fake news’ on its platforms. Consumers, especially those in the progressive space, thought immediately of Alex Jones: he’s making violent threats, smearing the victims of school shootings…” But nearly two years later, when Holt stumbled on Infowars on Spotify, his tweet about it went viral. He followed up quickly with an article outlining how Jones’ violent rhetoric violated Spotify’s terms of service, which led to a boycott against the platform—and Jones’ subsequent termination from it.

Holt emphasized that the most meaningful action these companies can undertake going forward is consistency. He said, “If these companies are going to make promises to their consumers who in large are demanding they don’t want hate speech and violent threats to be part of the user experience, if those are promises made, they should be promises kept … If these platforms want to host that radical experiment [of free speech] with even the most violent and extremist elements of it, I think they should be honest about it with consumers.”

Listeners can keep up with Holt’s intrepid research and reporting by visiting rightwingwatch.org or by following him on Twitter at @jaredlholt.