The Progressive Happy Hour: Brett Kavanaugh, Reproductive Justice and the Fight Ahead - People For the American Way
Skip to main content

The Progressive Happy Hour: Brett Kavanaugh, Reproductive Justice and the Fight Ahead 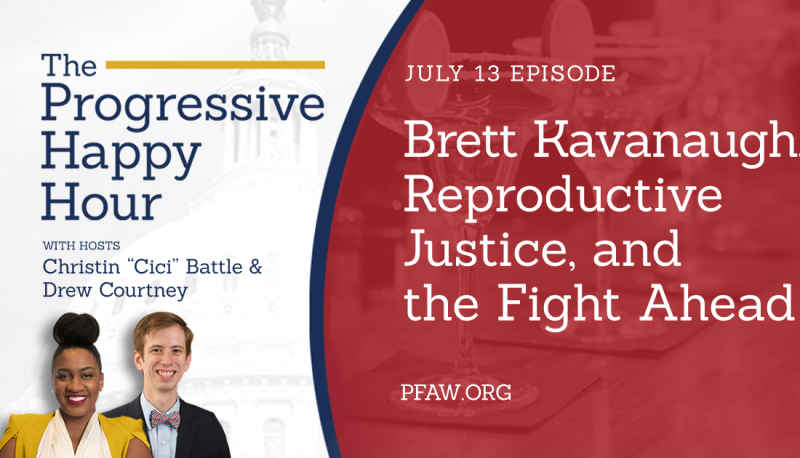 On Monday, July 9, President Donald Trump nominated Brett Kavanaugh to fill Justice Anthony Kennedy’s seat on the Supreme Court. Kavanaugh, like every other name on the president’s shortlist, passed Trump’s litmus test, including his promise to select a justice who would  requirement when he promised to overturn Roe v. Wade, and millions of concerned Americans across the country are sounding the alarm about the lasting damage he could do, particularly regarding reproductive rights, if confirmed.

In the July 13 episode of “The Progressive Happy Hour,” co-hosts Drew Courtney and Cici Battle sat down with All* Above All Senior Policy and Legislative Affairs Manger Kelsey Ryland to discuss how our courts have shaped abortion access, how abortion restrictions further tightened even with Roe v. Wade in place, and what’s at stake if Brett Kavanaugh is confirmed.

Ryland shared, “There are a lot of cases making their way up to the Supreme Court that give them a real opportunity to undo the promise of Roe,” including restrictions on safe and common abortion methods and outright bans as early as six weeks after conception. Aside from overturning Roe, she continued, the Supreme Court could also “chip away at it in such a way that makes it totally useless as a promise. And we’ve seen that Kavanaugh is committed to that. There’s a lot at risk.”

Too many low-income women, women of color and young people are already living in a post-Roe world, Ryland continued. “They are the most affected by this panoply of anti-family policies. From cuts to Medicaid […] to ineffective sex education, there are menus of options that set someone up to not have the resources they need to thrive. We need to start articulating what we believe we want and asking our champions in Congress to ask on that.”

Ryland offered a creative angle on how activists can inspire others join the fight. She said, “Call your member of Congress. I’ve taken to doing Instagram videos of myself calling and showing my friends, ‘This is what I said. I probably stumbled over my words and probably didn’t say the right thing, but they still heard from me.’ That’s how we stopped the ACA from being repealed: with people power saying ‘no way; not on my watch.’ That’s what we have to do with the SCOTUS nominee. We have to stand up and say no. Get some friends together and before you have dinner, everybody pick up the phone and make a call.”