The Progressive Happy Hour: Catching Up On the Mueller Investigation - People For the American Way
Skip to main content

The Progressive Happy Hour: Catching Up On the Mueller Investigation 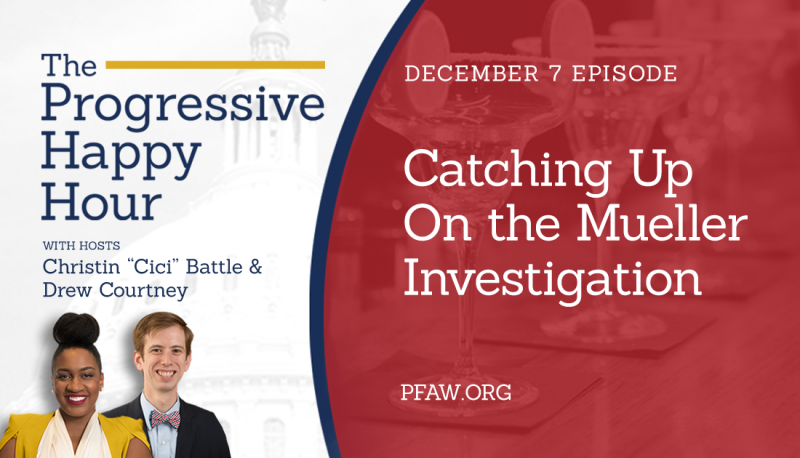 Developments in Special Counsel Robert Mueller’s Russia probe continued to twist and turn this week, but as Americans digest the details of this news and speculate about what might happen next, it’s equally important to place these developments in the broader context of the threat to our democracy.

In the December 7 episode of “The Progressive Happy Hour,” cohost Christin “Cici” Battle and guest host Diallo Brooks sit down with PFAW Government by the People Campaign Manager Rio Tazewell to discuss how any potential ties to Russia for Trump and his allies might influence the health of our democracy, Congress’s shifting role in the investigation, and what activists can do to protect it.

Rio noted that Congress will hold more power to protect the investigation when House Democrats take control in January. He said, “The hearings that have happened in the [Republican-controlled] Judiciary Committee have been a sham. They haven’t been designed to get to the truth, [but] the new House will be able to have people testify under oath and issue subpoenas to conduct their own investigation.”

Rio also explained what the investigation reveals about the threat to our democracy, sharing, “We can’t have a healthy democracy when the government is controlled by wealthy [Russian] oligarchs who are beholden to murderous dictators … It intersects with every other issue: Whether you’re trying to dismantle systemic racism or sexism or confront issues like climate change, you can’t do that effectively unless you have a government that represents the interests of the people.”

Hundreds of thousands of dedicated activists are poised to organize en masse to demand accountability whenever the president’s actions blatantly undermine the investigation, as they did when Trump forced Jeff Sessions out as attorney general. To join the fight, listeners can visit trumpisnotabovethelaw.org. To learn more about Rio and his work, listeners can follow him on Twitter and Facebook.

Also in this episode, Cici shares a funny anecdote from her recent hike on Mount Kilimanjaro.