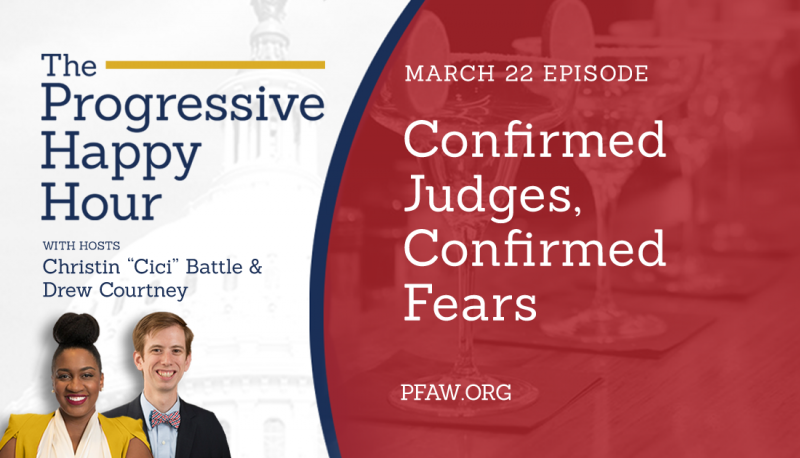 Over the past two years, Donald Trump has made good on his promise to transform the federal judiciary by appointing far-right judges for lifetime seats. The Supreme Court and lower federal courts have a direct impact on our rights and liberties, but the president is stacking the bench with narrow-minded elitists who serve the interests of corporations and the rich at the expense of all of us.

In the March 22 episode of “The Progressive Happy Hour,” cohosts Drew Courtney and Cici Battle talk to PFAW Senior Fellow Elliot Mincberg about the damage done by Trump-appointed judges and what progressives can do to fight Trump’s judicial takeover.

Mincberg explained how essential courts are to safeguarding our rights: “Your rights only mean what the courts say they do. Whether it’s civil rights, reproductive rights, or First Amendment rights, it’s the courts that have to enforce them.”

Nominating and confirming Trump judges—especially at such an alarming rate—have yielded horrible results, such as the 6th Circuit Court recently upholding an Ohio state law that defunded Planned Parenthood. In response, Mincberg stated, “As we see more and more Trump judges, we see a virus spreading across the entire country with these terrible decisions that are having an awful effect on everyday Americans.”

Mincberg highlighted that it is critical to expose Trump judicial nominees’ backgrounds and push senators of both parties to oppose their nominations. Republican senators are voting in lockstep to confirm these judges so when they vote to confirm them, we must hold them accountable for their shameful votes. And as the 2020 presidential campaign continues to heat up, we must demand that Democratic candidates prioritize nominating fair-minded constitutionalists to our federal courts.