The Progressive Happy Hour: Fighting for Racial Justice in 2019 - People For the American Way
Skip to main content

The Progressive Happy Hour: Fighting for Racial Justice in 2019 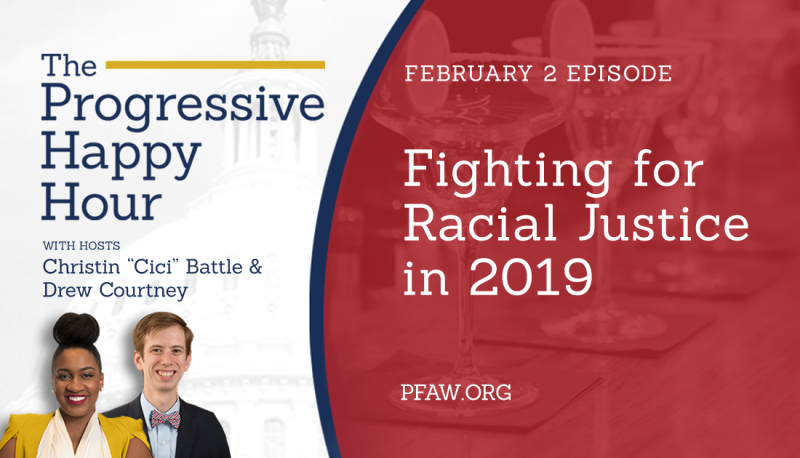 In Trump’s era of unabashed racism, racist attacks and rhetoric continue to escalate at a frightening pace. In January 2019 alone, three major incidents made headlines. But racial justice is about more than just denouncing individual racist acts—it’s about understanding and fighting the economic, social and political systems in place that perpetuate racial oppression and uplift white supremacy.

In the February 1 episode of “The Progressive Happy Hour,” cohosts Cici Battle and Drew Courtney talk to PFAW Senior Director of Outreach and Public Engagement Diallo Brooks about what racial justice really means and what progressives can do to demonstrate their commitment to racial justice this year.

Diallo described structural racism as “a scab that has been scraped off of a wound that’s been a part of America forever. There’s no part of American history that doesn’t [uplift] the deep racial divide and the marginalizing of [racial and ethnic groups] … We usually think about racism as this hidden thing … but those problems still exist … It’s high time that we as Americans step back and ask, ‘What are we really doing to destroy structural racism?’”

Diallo noted that especially for white activists, “It’s very important … to have these conversations about white supremacy. We have to all have a conscious awareness about white privilege and about white fragility.” He offered this example: “As a man, I can’t be fragile about masculinity in a way that I can’t check or change … how I might behave and how that impacts other people. I can’t be caught up in my feelings that … ‘I’m a good man.’ There are things I might need to learn how to do better, and I have to be open to hearing that.”

To learn more about and commit to racial justice, Cici recommended the books The New Jim Crow: Mass Incarceration in the Age of Colorblindness and Why I’m No Longer Talking to White People About Race.