The Progressive Happy Hour: How the Alt-Right is Pushing Hate on YouTube - People For the American Way
Skip to main content

The Progressive Happy Hour: How the Alt-Right is Pushing Hate on YouTube 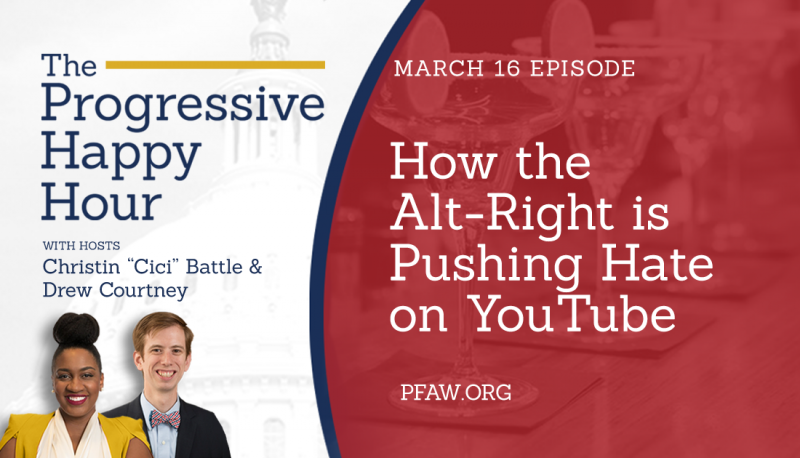 In the wake of the 2016 election, there has been a surge of activity among the white supremacist alt-right—and one of the primary places they are pushing their hateful and dangerous ideology is on YouTube.

In the March 16 episode of “The Progressive Happy Hour,” co-hosts Christin “Cici” Battle and Drew Courtney sat down with Jared Holt, research associate at PFAW’s Right Wing Watch, to talk about these extremists and the technology that enables them.

Jared explained that as an umbrella term, the alt-right is “a white nationalist movement that seeks to create a white ethno-state.” The label is “a term meant to sanitize incredible anti-Semitism and incredible racism… it’s disgusting on its face.”

He noted that the main stomping ground for these figures is YouTube, which has struggled with monitoring the millions of hours of videos uploaded each day and has often failed to enforce its own community guidelines. “They are flooding the public information sphere with their ideology,” Jared said.

You can read Jared’s 2017 report about white supremacists on YouTube here.