The Progressive Happy Hour: How the Religious Right is Informing Policy 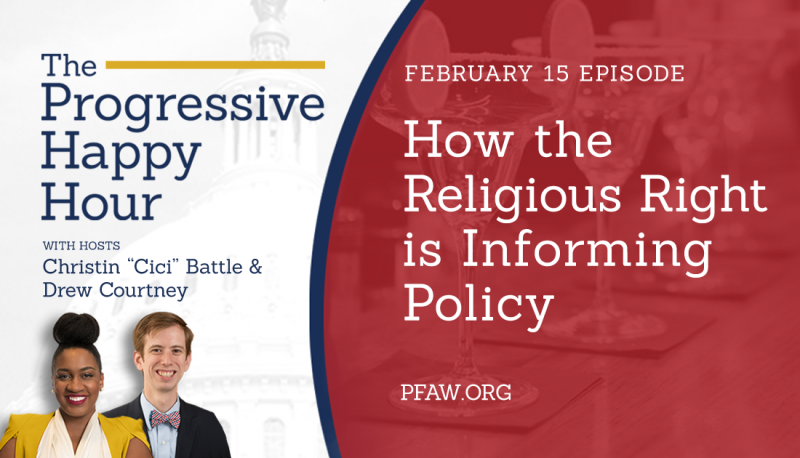 Members of the Religious Right remain some of President Trump’s most ardent supporters, in part because of the close access they now have to the White House. But that unprecedented access has grave implications for our policies,  our civil and human rights protections, and to governmental support for our basic economic needs.

In the February 15 episode of “The Progressive Happy Hour,” cohost Drew Courtney and guest host Diallo Brooks talk to PFAW Senior Fellow Peter Montgomery about how Capitol Ministries, a right-wing evangelical organization, and its head Ralph Drollinger, established a seat at the table in the Trump administration – and the dangerous beliefs they’re trying to push into policy.

Peter explained, “Capitol Ministries is a group that runs Bible study groups for members of the House and Senate and for members of Trump’s cabinet … There’s nothing wrong with studying the Bible, but Ralph Drollinger … teaches that the Bible mandates [opposition] to LGBTQ equality and entitlement programs [to] Cabinet members who run federal agencies: Mike Pence; Mike Pompeo, Secretary of State; Alexander Acosta, Department of Labor; Alex Azar from HHS; Jim Bridenstine from NASA; Ben Carson; Betsey DeVos; Sonny Purdue; [and] Rick Perry.”

In addition to appointing Vice President Pence and other Religious Right figures into his Cabinet, Peter continued, “Trump has given them unparalleled access. Mike Pence and his staff make sure there’s a steady stream of conservative evangelicals coming through the White House every week … President Trump meets with leaders [and] does phone calls to maintain those relationships.”

Peter stressed: “I don’t think there’s enough awareness of how influential [Drollinger] is and the kind of positions that he … can inject into the policy stream. And the policies [Capitol Ministries] supports aren’t about promoting equality for all or religious pluralism and tolerance … It’s troubling enough to hear that from TV evangelists, but it’s much more troubling when it comes from someone with this very privileged access to policymakers.”