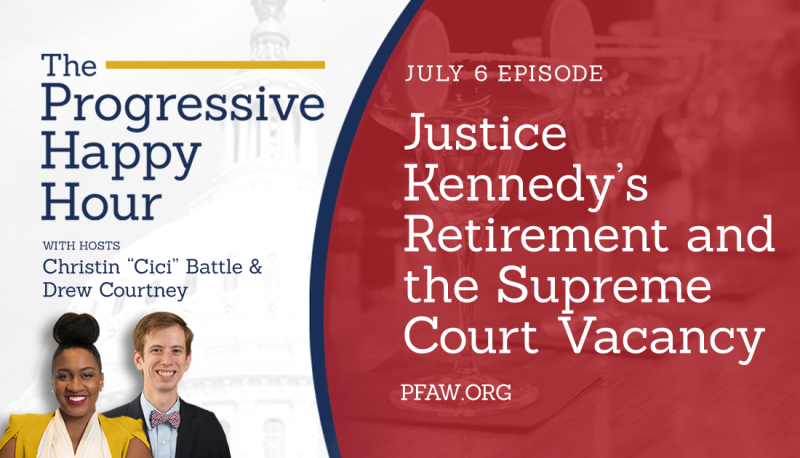 In the July 10 episode of “The Progressive Happy Hour,” co-hosts Drew Courtney and Cici Battle sat down with PFAW Senior Fellow Elliot Mincberg to discuss how Justice Kennedy shaped the Court and the possible consequences of another right-wing ideologue on the bench.

Mincberg said that while “there is no question that Anthony Kennedy is a conservative Republican, he’s nowhere near where so many of our current justices are. He’s played a critical role in preserving and advancing some very important rights” on abortion and reproductive health care, marriage equality, affirmative action, and presidential power.

What are the stakes after Kennedy vacates and a new justice is nominated? “All the marbles,” said Mincberg. “LGBT rights could be gone with another Trump nominee. Roe v. Wade equally quickly could be gone. [Decisions on] the environment and presidential power. Trump has said very clearly he wants to go after the Affordable Care Act; a Supreme Court with another Trump nominee could easily produce that terrible result.” On Trump’s shortlist of nominees, Mincberg noted, “Each has records that will make Trump very proud. They are conservative judicial activists who even other Republican judges think are often wrong … and who would like to take us back to pre-New Deal days if they can.”

Mincberg stressed that senators in Alaska, Indiana, Maine, North Dakota and West Virginia are critical to the path to victory to block Trump’s nomination. He urged every concerned activist to “contact their senators and tell them not to vote for anyone who is on Trump’s list,” and to encourage friends and family in those key states to do the same.