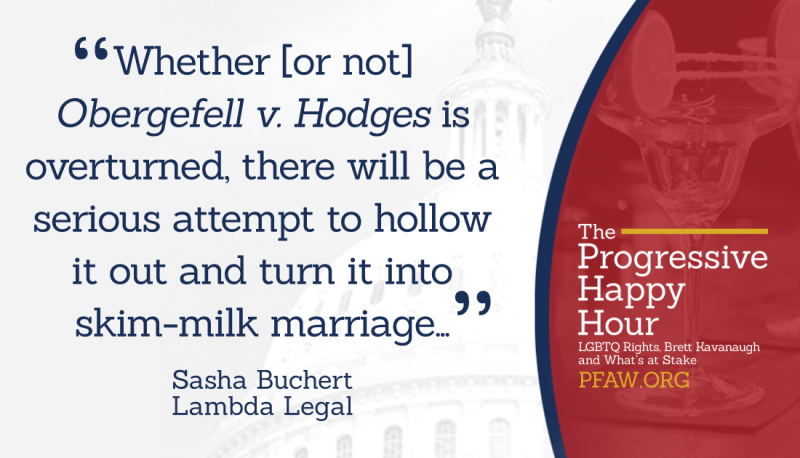 Since Brett Kavanaugh was nominated to the Supreme Court earlier this month, activists across the country have galvanized to articulate the myriad civil rights and civil liberties protections that would be jeopardized if Kavanaugh were to be confirmed. As with women’s reproductive rights, both the  and the lower courts have played an instrumental role in recognizing the constitutional rights of LGBTQ people.

In the July 20 episode of “The Progressive Happy Hour,” co-host Drew Courtney and PFAW’s Right Wing Watch Research Director Adele Stan sat down with Lambda Legal Staff Attorney Sasha Buchert to discuss Kavanaugh’s judicial record and philosophy, the broader importance of the judiciary at the lower court level and the threats to LGBTQ civil rights if he is confirmed.

On Brett Kavanaugh’s possible confirmation to the Supreme Court, Buchert explained that Kavanaugh opposes the use of the Commerce Clause as the basis for essential programs like Obamacare, and noted, “Everything we know and has come from the Commerce Clause, including the administrative protections that we enjoy. He’s gone on record saying the individual mandate violates the Commerce Clause.” Landmark federal anti-discrimination laws like Title VII have also been upheld in judicial recognition of Congress’s broad authority under the Commerce Clause.

Buchert also noted that LGBTQ issues intersect with a number of other critical issues, including worker protections, healthcare protections, and protections for a woman’s right to choose. She continued, “Whether [or not] Obergefell v. Hodges is overturned, there will be a serious attempt to hollow it out and turn it into skim-milk marriage, where you don’t get to have equal benefits [from] your employer; you don’t get to have your name on your child’s birth certificate.”

Buchert emphasized how urgent it is to contact Congress and encourage them to fight Kavanaugh’s confirmation. “We need to continue to build the momentum and awareness of who LGBT people are. We’re just like everyone else; we have the same dreams and hopes.” She also stressed that concerned citizens have an opportunity to raise their concerns with their senators, adding, “We’re [talking] to our base about how important is to contact their senators … and let them know that they want them to oppose vocally.”