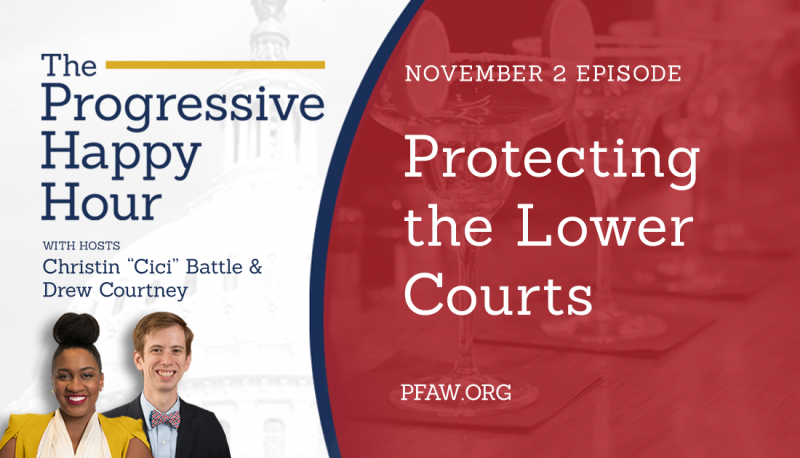 After Supreme Court Justice Brett Kavanaugh’s confirmation last month, more and more Americans are indicating that Supreme Court appointments are “very important” to them in the upcoming midterm election. And while we absolutely should value our nation’s highest court and the justices who sit on its bench, the reality is that most cases never make it to the high court, which means that lower court judges also have ample opportunity to affect our lives through their rulings.

On the November 2 episode of “The Progressive Happy Hour,” cohosts Cici Battle and Drew Courtney talk to PFAW Senior Legislative Counsel and fervent Houston Astros fan Paul Gordon about President Trump’s efforts to reshape the judiciary through his lower court appointments and the norms and precedents that the Senate Judiciary Committee has discarded to confirm Trump’s nominees.

Paul explained that over the past few weeks, while the Senate has been out on recess, “every other committee canceled the hearings they were planning on having, but not the Senate Judiciary Committee. [They had two hearings] without any Democratic senators in town to attend. It is the first time in history that the Judiciary Committee has had a nominations hearing during the recess and before the election without the consent of the other party.”

There are many dirty tricks at work in the effort to reshape the judiciary. Not only is the demographic makeup of Trump’s nominees overwhelmingly white and male, the Judiciary Committee has abandoned rules and long-standing precedents to speed up these confirmations. Paul continued, “We’ve had a longtime tradition that judges don’t get hearings unless they are supported by their home state senators. It’s been like that for about 100 years … [But] what Chuck Grassley has been doing [is using] one set of rules for one party and another set of rules for another party. That’s the definition of lawlessness.”

Progressives can push back and stop this right-wing takeover of our courts, most immediately by voting in next week’s midterm election. Paul emphasized, “Go out and vote as if your democracy was at stake, because it is.” Paul also encouraged listeners to educate their friends and family on the issue, contact their senators to encourage them to vote against these nominees (or thank them if they have), and visit PFAW’s website to stay up to date on what’s going on with these nominees.

Also in this episode, Drew and Cici debate the use of the word “unfurled,” with Paul chiming in about the linguistic phenomenon of the lexical gap.