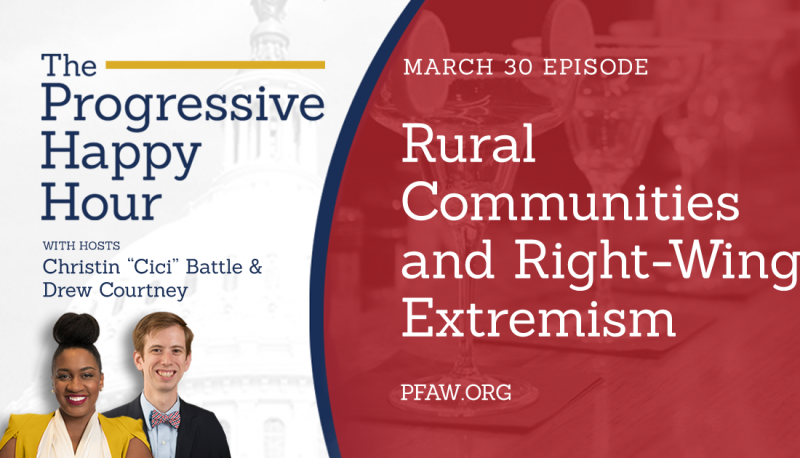 Get More from The Progressive Happy Hour Podcast

Extreme segments of the Right are exploiting a void left by the absence of progressive investment in many rural communities, according to a new report out from Down Home North Carolina and People’s Action.

In the March 30 episode of “The Progressive Happy Hour,” co-hosts Christin “Cici” Battle and Drew Courtney sat down with Jessica Juarez-Scruggs, deputy policy director of People’s Action, to talk about organizing in rural areas.

The report is based on a survey collected by knocking on thousands of doors in two rural counties in North Carolina to find out about the issues that residents are most focused on. Across all racial backgrounds, the top concerns identified were losing access to health care, not having a job that pays enough, not having food on the table, and losing access to housing. The research was intended as a first step in an effort toward progressive organizing around the concerns of these communities.

“There’s a real fear on the Right if white poor folks and folks of color ever get together, there’s gonna be a problem. So they have used fear and division and hatred to keep those two groups apart and to keep us from building a multiracial alliance. And that’s exactly what’s happened in these areas. If we don’t step in as a progressive movement—if we don’t get active—then there’s no counter-voice.”

Sustainable organizing in rural communities, she said, can’t be done “by hiding from race. So often we say ‘working-class’ and we mean that as a substitute for ‘white’… We have to have real and honest conversations. And part of that is struggling with race and the legacies and histories in these communities.”