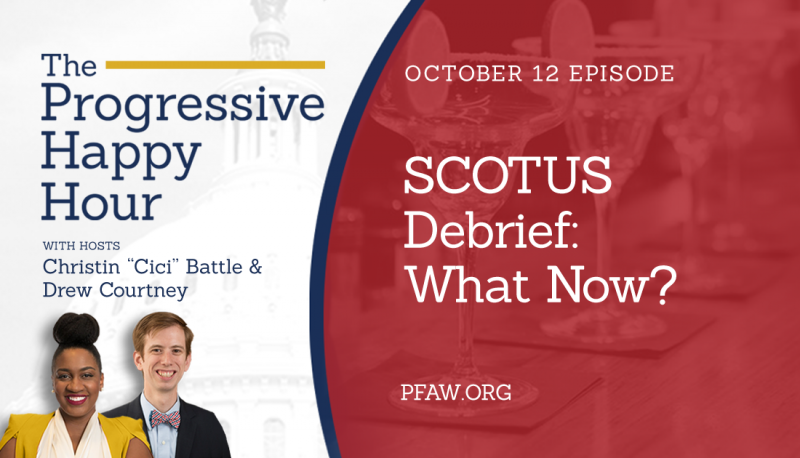 On October 6, culminating a process rife with corruption from the very start, Judge Brett Kavanaugh was confirmed to the Supreme Court by the U.S. Senate with a 50-48 vote. When the president named Kavanaugh as his nominee in early July, progressive activists were energized for the fight ahead, but it can be challenging to sustain that energy after devastating losses like this one.

On the October 12 episode of “The Progressive Happy Hour,” cohosts Drew Courtney and Cici Battle debrief with each other about the fight to stop Kavanaugh and how progressives will move forward after losing that fight.

Drew shared that “for me, this felt more like Election Day 2016 than anything that has happened since Election Day 2016 to see Brett Kavanaugh confirmed. So what do we do next; where does the movement go now?” He emphasized how important it is to focus on local leadership after losses like this: “We have to build power from the grassroots up. The Supreme Court and the federal courts are an indicator of power, but the only way to take the courts back is to win election after election from the ground up.”

Cici reiterated the need for capacity-building pipelines to cultivate progressive local candidates: “We have to make sure that we invest money into people so they have the capacity to run, and at the same time, we’re going to invest money in communities so they understand how the entire process works.”

She offered a useful analogy to engage discouraged folks: “Voting is like an outfit: there are different components of the outfit, and one component can throw the whole outfit off. Those shoes don’t go with that. But we can’t just throw the outfit away. What we have to do is get different shoes. So hopefully … people realize this wake-up call that we [all] have to engage. We don’t have the luxury of engaging certain parts without engaging all of them.”

Also in this episode, Drew offers listeners one easy action to do for their country: “Get your flu shot … to help save infants and elderly people. Get your flu shot for Ruth [Bader Ginsburg]!”