The Progressive Happy Hour: Standing Up for Workers’ Rights - People For the American Way
Skip to main content

The Progressive Happy Hour: Standing Up for Workers’ Rights 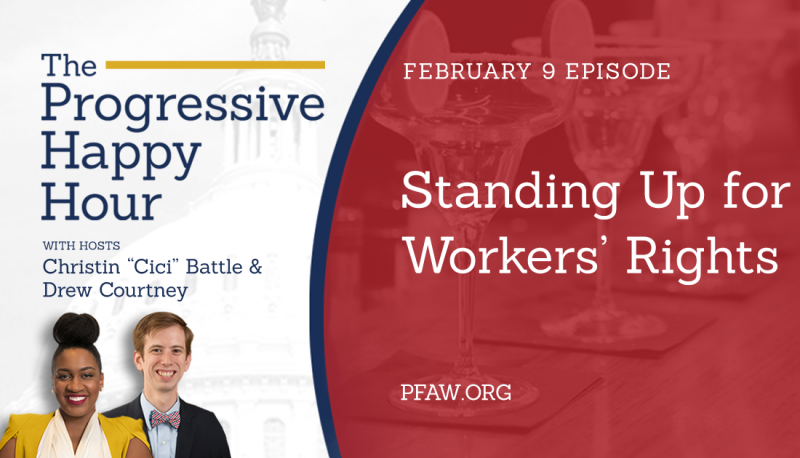 Later this month, the Supreme Court will hear arguments in a case that threatens to undermine the ability of working people to come together in unions and fight for fair pay and equitable workplaces.

In the February 9 episode of “The Progressive Happy Hour,” hosts Christin “Cici” Battle and Drew Courtney sat down with Jobs With Justice Executive Director Sarita Gupta to learn more about the Janus v. AFSCME case and what’s at stake for workers’ rights.

“The forces behind this case simply do not believe that working people should have the same freedoms and opportunities as they do,” Sarita explained. “Their aim is to interfere with the ability of working people to stand together in unions and negotiate for a fair return on their work… These are the same rich and powerful people behind the recent tax scam efforts. They’re the folks who are getting rid of public education. They want to privatize vital public services that we need, and they’re suppressing the vote. That’s who we’re talking about here. They’re trying to undermine the most important ways we gain opportunity and freedom to thrive.”

Sarita urged listeners to stand up for these rights by joining the Working People’s Day of Action on February 24.