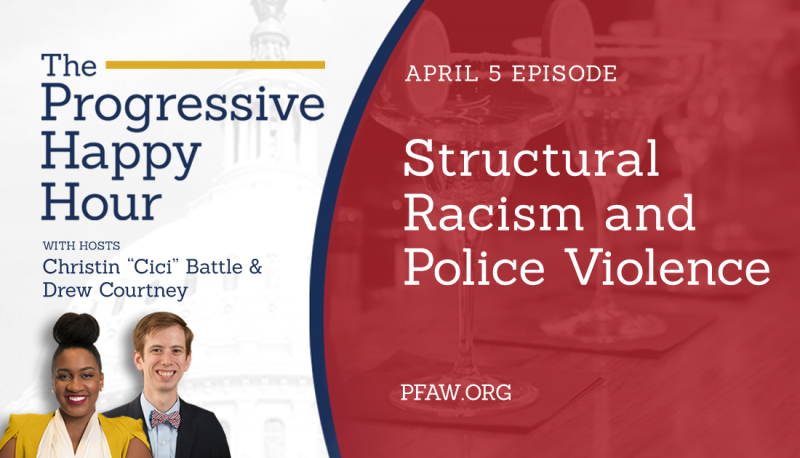 In response to the fatal shooting of unarmed 22-year old Stephon Clark in his grandmother’s backyard in Sacramento last March, the California State Assembly is now considering reforming its use-of-force law to reduce police’s use of force in the state. Like too many others before him, Clark’s death shone a spotlight on the role of racial bias in law enforcement, but systemic racism – the kind of racism that is manifested in our country’s  institutions, laws and policies – also plays a key factor.

In the April 5 episode of “The Progressive Happy Hour,” cohosts Drew Courtney and Cici Battle talk to Diallo Brooks, PFAW’s senior director of outreach and public engagement, about how such proposed legislation, while a step in the right direction, is only one component in creating positive systemic change.

Diallo acknowledged that California’s proposed legislation “mitigate[s] some of the systems that have exacerbated police violence … Public policy impacts people’s lives. There are structural pieces in place that exacerbate confrontations … It’s one thing to have it written in the law, [but] how [is it] implemented? [The difference between] ‘I was suspicious that something was going to happen’ and ‘I was sure that something was going to happen’ –there is some ambiguity around [how that will work].”

“The community needs to be engaged,” Diallo continued, “around what kind of training is important.” Lawmakers must also vet the training, provide the proper tools, and collect data to measure success, he said, noting that “there has to be real time, on-the-ground, constant checking in on how this is working.”

Diallo noted that the Black community largely lacks trust in law enforcement to protect them: “The communities that are most dramatically affected are not at the table, not making decisions, not a part of the conversations, not represented fairly … The system works exactly the way it was built to work. It was never meant to protect Black lives.”