The Progressive Happy Hour: The Fight Against ‘Citizens United’ - People For the American Way
Skip to main content 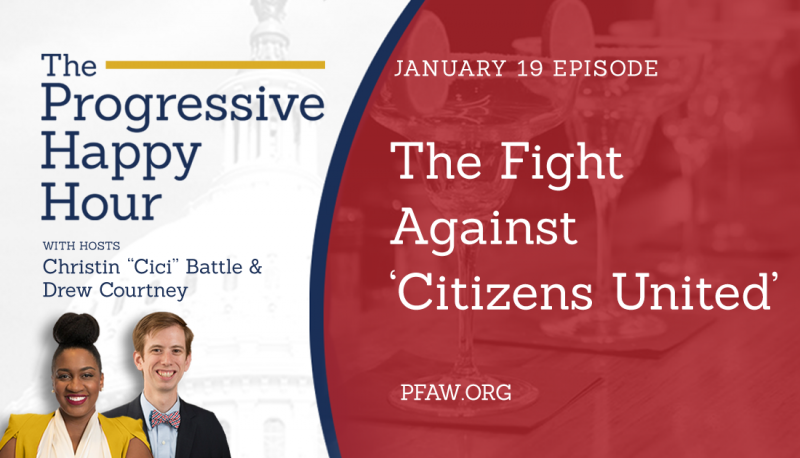 This weekend marks the eighth anniversary of the infamous Supreme Court Citizens United decision, which paved the way for corporations to spend unlimited amounts of money influencing elections.

In the January 19 episode of “The Progressive Happy Hour,” hosts Christin “Cici” Battle and Drew Courtney sat down with Rio Tazewell, PFAW’s Government By the People Campaign Manager, to talk about the destructive legacy of Citizens United and the ways in which people across the country are successfully pushing for money in politics reform.

“Virtually every issue is touched by this pervasive issue of money in politics,” Rio said. “At the end of the day, the government is supposed to respond to people’s needs and solve problems. At its best, that is what it’s supposed to do—whether it’s to reduce inequality, confront racial injustice or gender inequality, or environmental degradation. Government is what we decide to do together. If our government is beholden to special interests that have their own agenda, then we’re going to have a really hard time addressing systemic inequality and issues of sustainability.”

At the same time, Rio pointed out, those same issues “can be more easily addressed if we have a democracy and a representative government that actually responds to the needs of the people as opposed to the wealthy.”

Also in this episode, Drew rants about the hypocrisy of the Religious Right over Donald Trump’s alleged affair with Stormy Daniels.