The Progressive Happy Hour: Trump Is Not Above the Law - People For the American Way
Skip to main content

The Progressive Happy Hour: Trump Is Not Above the Law 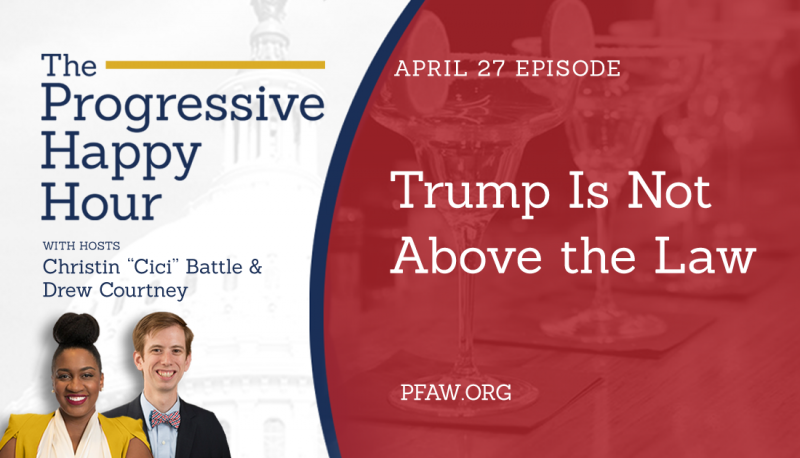 As Congress advances a bipartisan bill to protect Special Counsel Robert Mueller’s investigation, President Trump is not backing down from his efforts to undermine and interfere with this critical work.

In the April 27 episode of “The Progressive Happy Hour,” co-hosts Christin “Cici” Battle and Drew Courtney sat down with Lisa Gilbert, vice president of legislative affairs at Public Citizen, to talk about the Russia investigation and what activists can do to help protect it.

If Trump were to fire Mueller, Lisa said, “we think it would mean a constitutional crisis. And that’s a big, bold thing to say, but it’s accurate. We’re talking about the firing of the person that is charged with looking into whether Donald Trump himself has broken the law. And if the president can fire people who are looking into their own crimes, we’ve crossed some kind of third rail. We can’t come back from that. So if Bob Mueller is fired, if the Russia investigation is interfered with in other mechanisms, we think that it’s a red line.”

Lisa encouraged listeners to visit www.TrumpIsNotAboveTheLaw.org to become part of the rapid response effort if Trump does act to compromise the investigation.

Also in this episode, Cici and Drew talk about this week’s DACA ruling and Kanye West’s recent pro-Trump tweets.