The Progressive Happy Hour: Trump’s Anti-Muslim Ideology and the Fight to Restore Religious Freedom - People For the American Way
Skip to main content 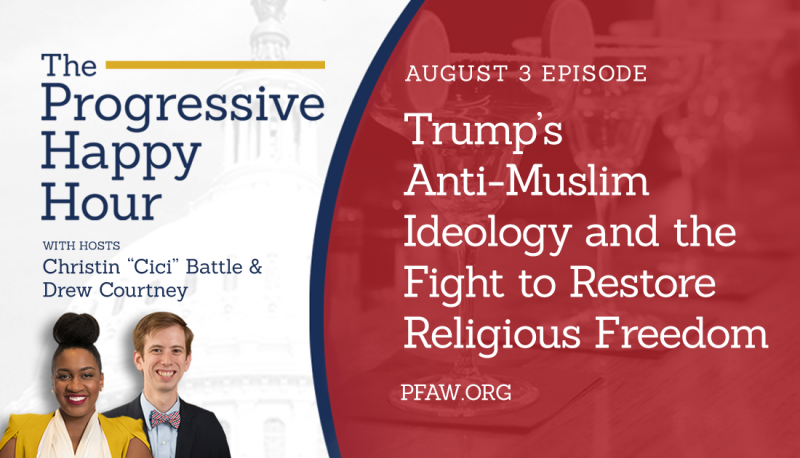 President Trump’s anti-Muslim bigotry is no secret. Aside from his hateful rhetoric, he’s issued three Muslim bans (his third attempt finally passed Supreme Court muster in June) and other policies attacking Muslims that have caused damage to millions of families around the world.

In the August 3 episode of “The Progressive Happy Hour,” co-hosts Drew Courtney and Cici Battle spoke with Muslim Advocates’ Legal Director Johnathan Smith about the Trump administration’s Muslim bans, its bigoted rhetoric and the Supreme Court’s complicity in normalizing that animus.

Smith shared that the Muslim ban isn’t the only anti-Muslim policy the Trump administration has enacted, and he highlighted how Trump’s hateful rhetoric inflicts further damage on the Muslim community: “[Trump] proudly and unapologetically demonizes and vilifies people because of their religion, national origin or race … We [have] see[n] an epic rise in hate crimes, troubling lies and attacks of arson and violence at mosques and other houses of worship—all of these are casualties of the president’s rhetoric and bigotry.”

Smith also discussed the contrast with how the Supreme Court in other settings has used religion as a sword to discriminate against third parties: “In the Masterpiece Cakeshop case, the Supreme Court … scoured the record to find evidence of anti-Christian animus to use that as a reason rule in favor of the baker. But in this case, where anti-Muslim animus is so obvious that you can’t ignore it … the Supreme Court says, ‘It’s okay; go ahead.’ The concern with Judge Kavanaugh, should he be confirmed, is that … he will shift the Court even more to the right and make it easier for Trump or other bigoted people to carry out policies of hatred and discrimination.”

Smith emphasized that these aren’t issues of “national security,” as Trump and others try to claim, and stressed, “These policies are cruel, heartless and unjust, and make a mockery of who we are as Americans and the values that we hold dear.” He encouraged listeners to “open up your heart and your mind to realize these issues matter,” and to visit Muslim Advocates’ website, join their email list and follow them on Facebook and Twitter to stay up-to-date on ways to get involved.