The Progressive Happy Hour: Trump’s Attacks on Our Courts - People For the American Way
Skip to main content

The Progressive Happy Hour: Trump’s Attacks on Our Courts 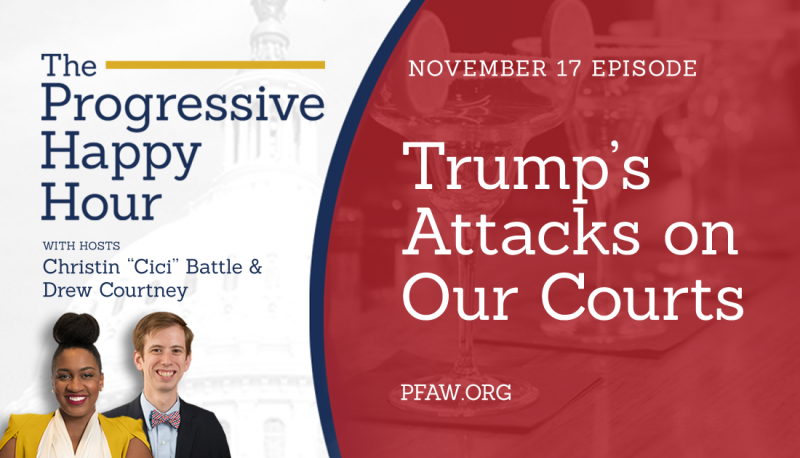 In the Trump era, our nation’s courts have served as a powerful check on this administration’s extreme agenda, from blocking the Muslim ban to halting Trump’s ban on transgender troops. But Republicans are working hard to fill the federal bench with judges who will rubber-stamp Trump’s attacks, even changing long-standing Senate practices to get their way.

In the November 17 episode of “The Progressive Happy Hour,” hosts Christin “Cici” Battle and Drew Courtney sit down with PFAW Executive Vice President Marge Baker to talk about Trump’s extreme judicial nominees that Senate Republicans are ramming through at a breakneck pace.

“The problem is that Republicans have been in total lockstep and have not broken rank on any of these nominees, no matter how bad they are,” Marge said.

To help pressure senators, she suggested that activists start making the courts part of their advocacy on other issues, from the environment to reproductive rights to LGBTQ equality: “Connect the courts to the issue that you care about. I guarantee you, no matter what the issue is, there’s a connection to the federal courts.”