The Progressive Happy Hour: What We Don't Know About Mueller's Report - People For the American Way
Skip to main content

The Progressive Happy Hour: What We Don’t Know About Mueller’s Report 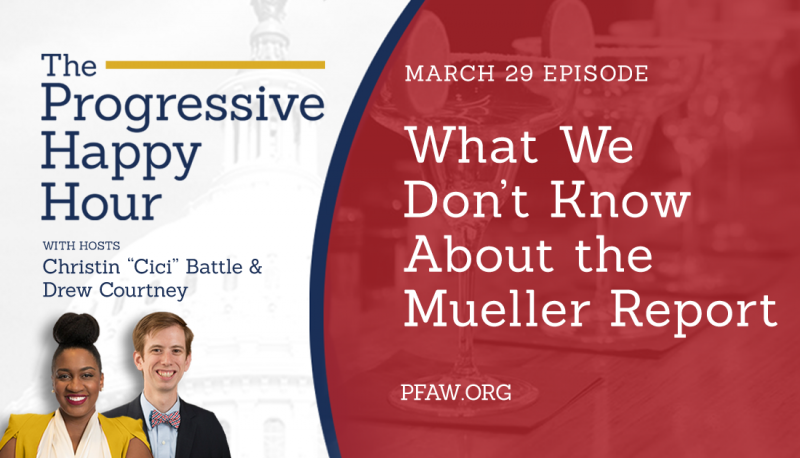 On March 22, Robert Mueller delivered his final report on the Russia investigation to Attorney General William Barr. In Barr’s four-page “summary” letter to Congress, he cherry-picked information from the report, which Trump’s defenders—and some mainstream media outlets—conveniently interpreted as clearing Trump of any wrongdoing. But no one aside from a few high-ranking DOJ officials has actually seen the report or its underlying findings, leaving many questions about the truth of the matter unanswered.

In the March 29 episode of “The Progressive Happy Hour,” cohosts Drew Courtney and Cici Battle talk to Marge Baker, PFAW’s executive vice president of policy and program, about what we still don’t know about the Mueller report and what progressive activists can do to support its full release.

Marge emphasized that Barr’s partisan loyalty is what got him the job in the first place: “We should be skeptical [because] Barr [is] a partisan attorney general put in place by Trump to protect him [and] who got the job because he … trashed Mueller’s theory for obstruction of justice [before he was nominated].”

Marge also stressed that “there are all sorts of issues around corruption and potential inappropriate connections with the Russian government … What Mueller investigated was the narrow question of whether or not there was—beyond a reasonable doubt—any law broken with respect to Trump and his campaign cooperating with the Russian government to influence the election. It doesn’t [address] what else is going on … that made Trump so solicitous of the Russians.”

“We have to see the full report and all of its findings,” Marge said, but beyond that, “there’s a whole set of issues that we need to investigate … and six important House committees are doing those investigations [into] Trump’s tax returns, potential obstruction of justice, public corruption … the most dangerous thing right now is to buy into Trump’s notion that ‘this is all over; no more investigations.’”