The Progressive Happy Hour: Winning the 2018 Midterms - People For the American Way
Skip to main content 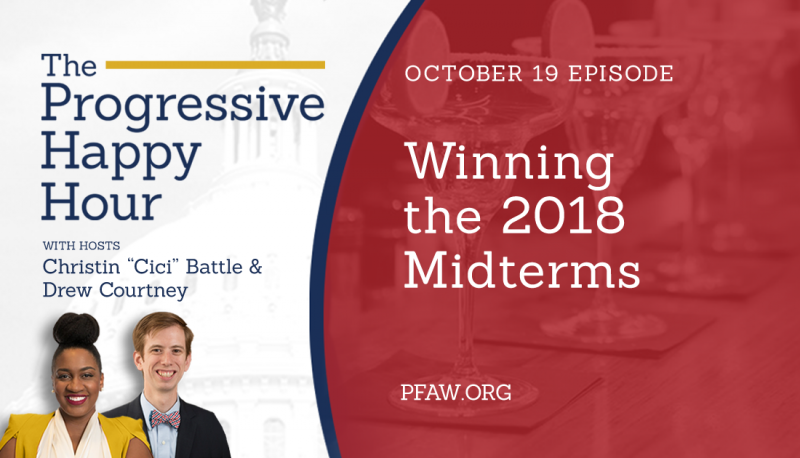 Listen to The Progressive Happy Hour

The 2018 midterm elections are less than 18 days away, and many Americans are already voting in what many hope will be a momentous election for progressives.

On the October 19 episode of “The Progressive Happy Hour,” host Drew Courtney talks to PFAW Political Director Lizet Ocampo about this year’s bellwether races, the races she’s most excited about, and the shameful and dishonest tactics Republicans are employing to try to get ahead.

Lizet noted that the energy and push for the blue wave is happening at the federal, state and local levels. She said, “A lot of folks are paying attention to the control of Congress. There are competitive Senate seats—in Nevada, Arizona, Texas, Tennessee. Control of the House is in play … and there are a lot of gains to be made in state legislatures – that’s what we do with our Next Up program … It’s critically important to win back that control now, because in some cases, these are the folks that will be involved in drawing district lines.”

Among the candidates that Lizet is particularly excited about are Florida, Georgia, and Arizona gubernatorial candidates Andrew Gillum, Stacey Abrams, and David Garcia, because they are candidates “who represent real people.” She is also excited by Next Up’s #MeToo slate of progressive women candidates whose experiences with sexual assault or harassment influenced their candidacy.

This election cycle is especially notable not just because of the numbers of well-qualified progressive candidates, but because their Republican opponents are using a racist, bigoted playbook. Lizet shared, “Trump without Trump doesn’t work in a lot of places. There has been some really despicable, racist stuff happening, and it hasn’t been working in those races.” Tactics like these, in addition to a surge in voter suppression tactics in key states like Georgia make it even more urgent for progressives to vote against them and ensure they aren’t elected into office.

Aside from voting, Lizet also urged listeners to make sure their family and friends are registered and ready to vote, and encouraged them to volunteer, phone bank or text. She said, “That’s how we win—it’s a grassroots operation. Make a party with your friends and make it fun!”

Also in this episode, Drew gets snobby about tea.

For more information about how to get involved and make a difference, email political@pfaw.org.