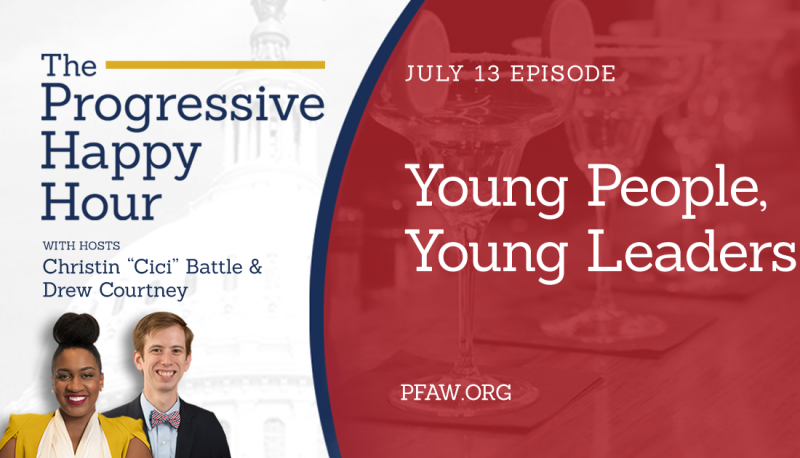 In our contemporary political moment, millions of progressive activists are engaging and fighting back against the Trump administration and the surge of far-right extremist candidates and federal officials. And though the critical nature of that work cannot be discounted, it’s local politics that addresses community issues and concerns and creates immediate, palpable change—and it’s young people who are often on the front lines.

In the July 27 episode of “The Progressive Happy Hour,” co-hosts Drew Courtney and Cici Battle sat down with D.C. Ward 8 State Board of Education Representative (and Young Elected Officials Network Communications and Program Coordinator) Markus Batchelor to discuss his road to political leadership, his vision for his community and how his young age gives him a unique opportunity to understand his constituents’ needs.

Batchelor got his start in politics as a high school student at Thurgood Marshall Academy in D.C. after emceeing a local political holiday celebration. He never looked back after that: “I got caught up in the sense of community and the activist spirit of the folks who were organizing around issues that matter and that I cared about … I knew that I wanted to figure out ways to close gaps and close inequalities, and make life better for the people around me and my peers.”

A few years after graduating high school, Batchelor spent two years on the D.C. Advisory Neighborhood Commission (ANC) before being elected as the youngest-ever member of the D.C. State Board of Education. Now 25 and a year and a half into his term, he is actively engaged in creating policy change for Ward 8 schools, and said that his young age is an asset, sharing that “there were plenty of people who said I shouldn’t run, ‘wait your turn’, ‘you can’t win’, ‘you can’t raise the money you need to’ … but the thing that encouraged me is that not only did I think have the right experience, I thought I had the right perspective. I had been in a classroom relatively recently, and understood what it meant to be a student, what I gained from my educational experience and what I wanted more of.”