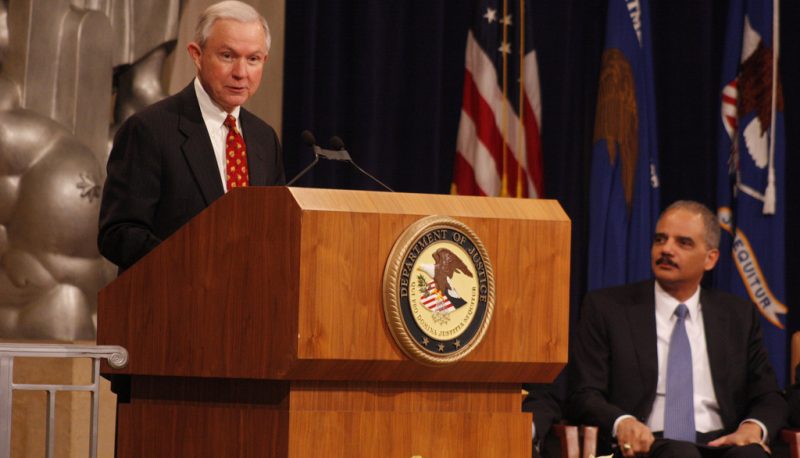 With all the attention lately on President Trump’s complaints about Attorney General Jeff Sessions, there has been very little focus on the genuine problems with Sessions’ job performance. In six key areas – voting rights, hate crimes, federal criminal law and mass incarceration, police reform, immigration, and civil rights enforcement – Sessions has undermined the Justice Department and harmed the American people. Indeed, these are some of the very reasons that far right supporters have urged Trump not to fire Sessions. If Sessions steps down as Attorney General, voluntarily or otherwise, the next Attorney General must remedy these problems. Trump won’t want that, but the Senate and the American people must demand it.

Contradicting previous AGs of both parties, Sessions has conducted a wholesale assault on voting rights. Less than a month after Sessions started as Attorney General, the DOJ switched sides in a case challenging a Texas voter ID law and abandoned its claim that the law was intended to discriminate. Although the lower court in that case again struck down the law anyway, what a Sessions DOJ will do when Texas appeals is a cause for deep concern. Chillingly, the Trump-Sessions DOJ budget proposal conspicuously omits a promise made by President Obama to “focus on detecting and challenging practices that violate Section 2 of the Voting Rights Act”, which bans practices that have a discriminatory effect on voters. Instead, the Sessions DOJ wrote to 44 states demanding information on what they have done to clean up their voting lists, suggesting that DOJ will “shift its resources towards scaremongering” over the nonexistent problem of voter fraud, as the Trump “Election Integrity” Commission has already begun to do. We need an Attorney General who will effectively protect the right to vote for all, not try to take it away.

Congress has given DOJ specific responsibility for prosecuting hate crimes, and after 13 Senators called on the Trump Administration to establish a task force to address the disturbing rise in hate crimes after the November election, DOJ did announce that a subcommittee of a broader task force on crime prevention would seek to address the issue. Senators and advocates are skeptical, noting that it “remains to be seen” whether the action will be fully resourced and effective or will be mere “tokenism”. Other than the new subcommittee, the Lawyers’ Committee for Civil Rights Under Law has pointed out that there has been a “deafening silence” from Mr. Sessions on the surge of hate crimes. In fact, Sessions fought against hate crime protection for LGBT persons when he was in the Senate. America needs an Attorney General committed to enforcing laws on hate crimes and to ensuring that such incidents are effectively reported.

When he was in the Senate, Sessions was able to stall bipartisan efforts at criminal justice reform and ending policies of mass incarceration. As Attorney General, “he has sent it reeling.” In May, he sent a memo instructing all federal prosecutors to pursue the harshest possible charges and sentencesagainst all crime suspects, including non-violent drug offenders, drawing criticism from even conservative reform advocates like Sen. Mike Lee. DOJ’s proposed budget would add 300 more federal prosecutors to work on immigration and criminal enforcement matters, who would all be subject to the directive to pursue harsh charges and sentences. Sessions has also personally written to Congress to seek to end a bipartisan appropriations rider that has prevented DOJ from prosecuting people for using medical marijuana that is legal under state law, and reversed a prior DOJ policy and proclaimed that DOJ will use privately run prisons, despite clear evidence of serious safety and related problems for both prison officials and prisoners. Recently, Sessions received bipartisan criticism for making it much easier for police to seize property even from innocent people under asset forfeiture rules. We need an Attorney General who will work with the growing bipartisan consensus to end failed mass incarceration and implement effective criminal law enforcement.

Despite effective previous DOJ efforts concerning improper and abusive local police practices, Sessions has reversed course. He announced a drastic policy shift in March that could “roll back decades of police reform,” sending a memo directing a “review” of all DOJ activities in this area, including plans to investigate existing consent decrees with local police that mandate an end to abusive practices. Shortly after sending the memo, Sessions tried to delay the signing of a comprehensive plan to reform police practices in Baltimore, despite the city’s own objections to the delay and support for the decree, and a federal judge rejected the delay and signed the decree. Sessions promptly criticized the decree, claiming it would “reduce the lawful powers” of the police. A month earlier, he announced that he was still considering whether to implement important recommendations concerning police reform in Chicago that were contained in DOJ reports, admitting that he had not even read the reports. And the Trump-Sessions DOJ budget proposes a 22 percent cut of some $75 million to DOJ’s largest grant program to help effective state and local law enforcement. America needs an Attorney General who will work to continue reforming abusive police practices and help improve police-community relations.

Prior to becoming Attorney General, Sessions supported Trump’s campaign immigration promises, such as limiting or banning immigration by Muslims, and has voted against bipartisan comprehensive immigration reform. As AG, Sessions has done even more than aggressively support those Trump policies in court. In April, Sessions directedthat all federal prosecutors’ offices, even those far from any border, devote significant new effort to prosecuting any and all immigration-related offenses, particularly non-violent offenses, reversing prior DOJ policies. Sessions dispatched 25 immigration judges to California and other locations, requiring that they work 12-hour days from 6 a.m. to 6 p.m. to reduce the backlog of deportation cases. He joined with DHS in backing plans to arrest undocumented immigrants at courthouses when they appear for proceedings not related to their immigration status. Despite cuts elsewhere, the DOJ budget would spend $80 million, an increase of 19 percent, to hire 75 more immigration judges, and would add 120 border prosecutors and other legal officials to focus even more on immigration enforcement.

Just this week, Sessions threatened to cut off significant federal funding to sanctuary cities, which have taken steps to protect immigrant families and communities, unless they agree to cooperate with aggressive federal immigration actions, including giving federal immigration agents access to local jails and holding immigrants without a warrant. In fact, the DOJ budget proposes changes to substantive federal law that would (1) require all local police to agree to detain immigrants in jail for longer than their scheduled release date in order to be picked up by federal authorities, (2) prohibit cities and states from enacting any policy that would bar their officials from asking people about their immigration status, and (3) allow suspension or “claw back” of grants from those that do not comply. But America needs an Attorney General who will help implement humane and effective immigration policies.

Despite a proud bipartisan history of civil rights enforcement, Sessions has taken DOJ backwards. One of Sessions’ first actions as Attorney General was to revoke guidance providing protection for transgender students in schools. DOJ under Sessions also dropped a lawsuit against the infamous North Carolina “bathroom bill” that harmed transgender students. Just this week, the Sessions DOJ went out of its way to file a friend-of-the court brief in a case to argue that federal law that prohibits sex discrimination in employment does not prohibit bias based on sexual orientation, in direct contradiction to the view of the Equal Employment Opportunity Commission, which has explained in that and other cases that federal law does provide such protection. Sessions has made clear his opposition to the use of consent decrees in police reform cases, as discussed above, and he is also causing DOJ to turn away from this effective enforcement tool in other areas, such as in a recent DOJ case involving religious discrimination against Muslims by a town that refused to allow the building of a mosque. And in June, DOJ switched sides in an important Supreme Court case, abandoning its position that a contract that forces workers to give up their right to bring a class action lawsuit against their employer violates the National Labor Relations Act, and instead supporting big business claims that such contracts are perfectly legal.

The 2018 Trump budget, moreover, clearly lays out a blueprint for severely cutting back on civil rights enforcement. Despite increases in funding in other areas, the budget calls for eliminating at least 121 positions in the Civil Rights Division. DOJ funds to help implement the Violence Against Women Act would be cut by some $2 million. And the DOJ budget conspicuously omits any mention of disability rights enforcement, while including language suggesting that DOJ will “prioritize the review” of consent decrees on school desegregation, suggesting that it will try to eliminate such decrees. Sessions has also supported a nominee (Eric Dreiband) to head the Civil Rights Division who has spent most of his career defending corporations accused of employment discrimination and to limiting the rights and remedies available to discrimination victims. We need an Attorney General who will enforce legal protections that ban discrimination based on race, gender, age, disability, and other prohibited factors.

In just six months, Jeff Sessions has shown his inability to be Attorney General for all the people of the United States, instead “turning the clock back” in many areas. Whenever we do get a new Attorney General, the American people must demand better. We need an Attorney General who will:

America needs an Attorney General who will fight for justice and equality, not against them. We cannot afford to do otherwise.

Whistleblower Hearing Shows Current DOJ Is Worse than in Watergate