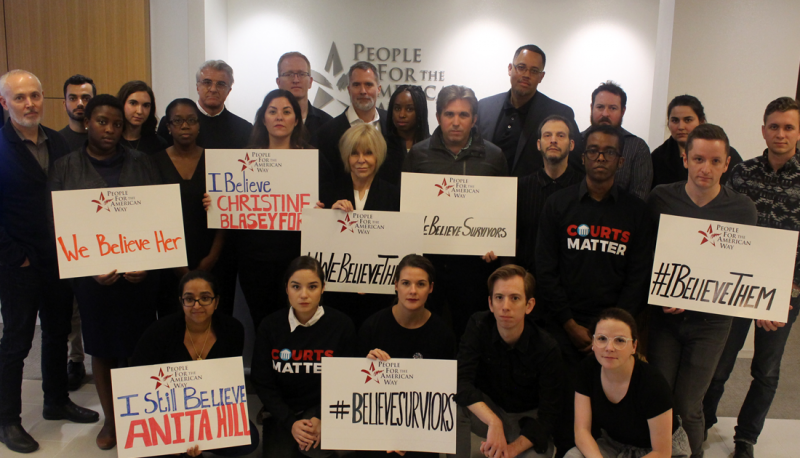 Even though Senate Republican leaders have rejected key proposals to make the upcoming hearing a fair one, Dr. Christine Blasey Ford has now agreed to testify before the Senate Judiciary Committee on Thursday about her serious allegations of sexual assault by Supreme Court nominee Brett Kavanaugh. These proposals included advice from within the Senate and outside experts that a thorough nonpartisan investigation is needed before the hearing, including by at least one supporter of Brett Kavanaugh, as well as requests that outside witnesses be called to testify, including longtime Kavanaugh friend Mark Judge, who Dr. Blasey Ford has stated was a participant in Kavanaugh’s misconduct. And Republicans made clear on Monday that they intend to proceed on Thursday, despite new allegations of sexual assault by Kavanaugh in college and a request from Ranking Member Feinstein for the FBI to first investigate all these allegations, which Kavanaugh has now called part of a “coordinated effort” at “character assassination.”

But Republicans are not finished trying to stack the deck in favor of Kavanaugh. One is saying he will vote for Kavanaugh no matter what Dr. Blasey Ford says. Others are suggesting a false standard for evaluating these claims – that the burden of proof is somehow on Dr. Blasey Ford and that unless Kavanaugh is proven to be dishonest by Dr. Blasey Ford (or other women who have spoken out with credible allegations of assault), he should be believed and his nomination to the Supreme Court should be approved.

That is clearly the wrong standard. It disrespects survivors of sexual assault, all women, and the Supreme Court nomination process.

Many people around the country, including me, believe Dr. Blasey Ford, and experts on sex crimes have explained that her account of what happened is credible. But she has no burden of proof at the upcoming hearing. She has not brought a legal claim of sexual assault against Kavanaugh. Instead, at great personal cost, she was dragged into the public spotlight against her will and has now courageously agreed to testify because of the pending nomination of Kavanaugh to a lifetime seat on the highest court in the land. The burden is not on Dr. Blasey Ford. Instead, it is up to Kavanaugh, in order to win confirmation for that lifetime seat, to prove to the Senate and the American people that he is honest and trustworthy, including with respect to his response to Dr. Blasey Ford’s allegations and those recently raised by his college classmate Deborah Ramirez. As longtime Kavanaugh booster Ben Wittes recently wrote, Kavanaugh “himself bears the burden of proof.”

And Kavanaugh does not start Thursday’s hearing with demonstrated honesty and credibility, key requirements if he is to be confirmed. To the contrary, completely apart from these latest concerns, Kavanaugh’s testimony at his earlier hearings was full of misrepresentations and what many have called outright lies. As selective aspects of his record during the Bush Administration have come to light during his recent hearings, it has become clear that he lied or misrepresented about a number of subjects, including his knowledge and use of documents stolen by a former Republican staff member, the degree of his involvement in several controversial Bush judicial nominations, his involvement in warrantless wiretapping and other questionable conduct by the Bush Administration, and his views on Roe v. Wade. In fact, he even misrepresented or distorted his own judicial opinions to the Senate Judiciary Committee in an effort to make his record appear more acceptable for elevation to the Supreme Court. These misrepresentations and prevarications alone warrant rejection of his nomination.

As in other instances concerning sexual assault, we will never see the kind of overwhelming physical or other evidence that some Republicans are asking for. But what should be clear is that unless Kavanaugh can meet the burden of proving his account, he should be disqualified from confirmation to the Supreme Court. This should be the conclusion even of those who have previously supported Kavanaugh’s nomination. As the late Senator Robert Byrd explained in deciding to withdraw his initial support for the nomination of Clarence Thomas and determining to vote against him after the Anita Hill hearings: