On January 13, the Senate confirmed Judge Robert Wilkins to sit on the U.S. Court of Appeals for the D.C. Circuit. So far, despite a growing backlog of judicial nominees, he is the only judge to have been confirmed this year.

There are currently 96 vacancies in federal courts across the country. Thirty-nine of them have been officially designated “judicial emergencies” by the Administrative Office of U.S. Courts, indicating that there are too few judges available to handle the court’s workload. This isn’t a built-in feature of the judicial system. In fact, the Senate could cut the judicial vacancy rate by one third today.

There are 32 federal judicial nominees who have been approved by the Judiciary Committee and are waiting for Senate confirmation votes – enough nominees to fill one-third of the country’s judicial vacancies and reduce the number of judicial emergencies by a quarter. All but three nominees cleared the Judiciary Committee with strong bipartisan support, most unanimously. The Senate could confirm all 32 in an afternoon if Republicans would agree to hold simple yes-or-no confirmation votes on their nominations. They could even confirm all 32 in less than five minutes by holding a unanimous consent vote. 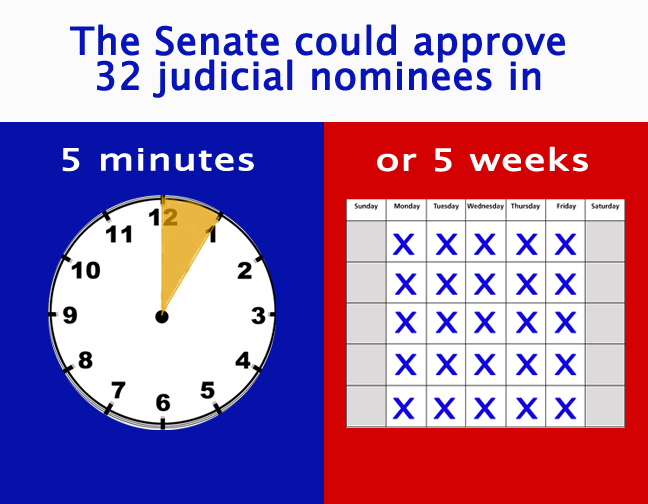 But Senate Republicans still seem to be uninterested in confirming nominees to carry out the business of the nation’s courts, even in the many cases where nominees have been recommended and supported by Republican senators.

Since the Senate was forced to change the rules of the filibuster in response to Republican intransigence, the GOP has retaliated by obstructing nominations in other ways. One of these has been demanding that each confirmation vote take the maximum amount of time possible: Senate rules allow for “post-cloture debate” after a filibuster has been broken – 30 hours of floor time for appeals court nominees and two hours for district court nominees. If Republicans forced the Senate to take the  maximum amount of time on all 32 nominees currently waiting for votes, it would take the Senate 204 hours to clear the backlog.

Those 204 hours would add up to five weeks of full-time work: five weeks in which the Senate wouldn’t be able to do anything else – not immigration reform, not a debt ceiling deal, not an update to the Voting Rights Act.

The Senate could use five weeks of its time this year to confirm judicial nominees. Or, Senate Republicans could agree to confirm all 32 nominees in five minutes, cut the number of judicial vacancies by a third, and move on to other business.

PFAW has launched a petition to urge Senators to address the judicial nominations crisis and stop the obstruction of judicial nominees .