The Truth About the Kavanaugh Protestors on Capitol Hill

Last week People For the American Way joined thousands of protestors who came out to oppose the nomination of Brett Kavanaugh to the Supreme Court. Although the crowds were objectively significant and some of the largest I have personally seen on Capitol Hill, President Trump and several Republican allies have made it a point to dismiss the demonstrators by calling them “paid agitators” and suggesting that the protests were not genuine. As someone who was on Capitol Hill nearly every day during the Kavanaugh nomination process, I can say undoubtedly that these characterizations could not be further from the truth. 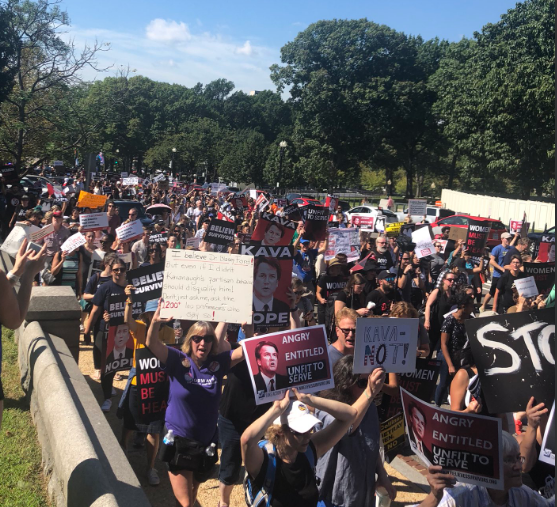 Due to the nature of the allegations made by Dr. Christine Blasey Ford against Kavanaugh, the protests were more intimate and at times emotionally charged compared to other political events. A large portion of those in attendance were sexual assault survivors who felt personally betrayed by members of Congress who did not take Dr. Blasey Ford’s accusations seriously—creating a sense of urgency to stop the nomination and a general feeling of frustration among those who were desperately trying to be heard before the final vote.

HUGE crowd outside SCOTUS calling on senators to #StopKavanaugh.

Demonstrations were constant most days last week, but the largest were on Thursday, Friday, and Saturday. Activists responded to Kavanaugh’s nomination in various ways on Capitol Hill, so at any point during those days there were multiple events happening around the Senate. For example, throughout the week protestors divided up and visited the offices of senators who they believed could swing the vote. Sometimes they engaged in “bird-dogging”; sometimes they requested a meeting with their senator; and sometimes they occupied the offices of certain senators until they were kicked out or felt their opinions had been adequately addressed.

I spent a lot of time with constituents from Maine and Alaska who had traveled an incredible distance to voice their concerns. One group of volunteers had spent 12 hours on a bus and was planning on spending less than 36 hours in DC before traveling 12 hours back home. The vast majority of these activists identified as women, and almost all were survivors of sexual assault. The general feeling from these women was one of duty to speak out against Brett Kavanaugh’s nomination because of their own personal experiences. After talking to close to 20 women about why they felt the need to spend their time and emotional energy on this cause, I was blown away by the determination of these groups and the heartfelt responses I received.

“I’m here as a survivor. I’m here because I’m really sick and tired of a country that keeps women in the shadows. I’m ready for women to be heard and valued. I’m ready for men to step up.” -Kali Bird Isis, constituent of @SenatorCollins #StopKavanaugh #Kavanaugh #BelieveSurvivors pic.twitter.com/SEqJAReBDR

There were also a number of large marches, rallies, and acts of civil disobedience last week organized by a coalition of women’s rights groups and attended by hundreds of activists. Again, the general mood at these events was one of urgency and personal frustration due to the past trauma many women in attendance had experienced. The largest march took place on Thursday when hundreds of passionate protestors walked from the D.C. Circuit Court to the Supreme Court before hosting a large rally in support of sexual assault survivors.

Most of the speakers at these rallies were survivors of assault and explained why they felt Kavanaugh’s nomination signified a larger problem of cultural acceptance of derogatory behavior towards women and a tendency to not believe survivors who come forward. The women who spoke did so knowing that they would almost certainly face backlash on the internet and at times from individuals in the crowd who had infiltrated the rally to heckle the speakers.

The police just went into the crowd to remove Ben Bergquam, the lone counterprotester from #California, who has been agitating and trolling protesters in real time at the #CancelKavanaugh march.

He’s still marching at the front, ahead of the throng. #DC pic.twitter.com/pc9OhXrgn9

The two biggest acts of civil disobedience took place on Thursday at the Hart Senate Office Building and Saturday in front of the U.S. Capitol. While these events were organized by a coalition of women’s rights groups—spearheaded by the Women’s March- they were attended by hundreds of activists who independently made the decision to sacrifice their time, liberty, and finances in order to get arrested in protest of Kavanaugh’s nomination. The vast majority of these women were those who had a particular desire to be heard and did not feel their concerns had been adequately addressed by their senators. In talking to the people on the ground, I found that many in attendance were angry enough to make these sacrifices and felt it was a necessary piece of the overall protests.

In sum, the activism last week came from a place of sincere frustration, anger, injustice, and fear for the future if we were to hand Brett Kavanaugh a lifetime seat on the highest court in our country. While many members of the GOP have tried to downplay these protests and lie about their origins, as someone who personally spent days on the ground with these women, my only takeaway is that it is impossible to fully capture the sincerity, anger, and anguish of the events that took place on Capitol Hill last week.