Thousands Rally Across the Country to Protect the Mueller Investigation 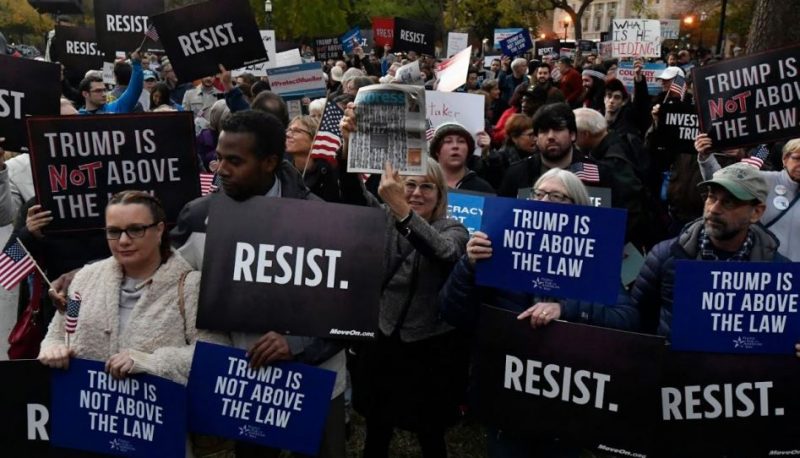 In response to the November 7 firing of Attorney General Jeff Sessions, thousands gathered across the country to show support for special counsel Robert Mueller’s investigation. These events were organized by the Nobody is Above the Law campaign which was set up to trigger emergency protests and rallies upon any signal that the integrity of the Mueller investigation could be in jeopardy.

Although People For the American Way has never supported Jeff Sessions as Attorney General or his dangerous far-right agenda, his recusal from the Russia investigation based on consultation with Department Of Justice ethics officials allowed Robert Mueller to function independently and remain objective as special counsel. Now, acting Attorney General Matthew Whitaker imposes a very serious threat to Mueller’s future and his team’s ability to complete the investigation without interference.

Because many believed that Sessions’ removal was inevitable in light of Trump’s hostile attitude towards Mueller as special counsel, People For the American Way joined a number of partners in planning events that would be “triggered” upon Sessions’ ousting, or other suspect events. After the November 7 announcement that the former Attorney General had in fact been “asked” to resign, we notified a number of members who had signed up to attend one of these events about the emergency rallies and urged them to show up and voice their concerns.

Huge crowd turned out tonight in Portland, ME! #ProtectMuellerNOW pic.twitter.com/xS3IMkYoLh

Hundreds of peaceful protests took place in most major cities and in a number of small towns and rural areas across the country. Crowd sizes ranged from several dozen people to several thousand, and included a number of prominent speakers from local organizations who explained why the situation called for special attention and concern.

PFAW staff attended an evening rally in Washington, D.C. where thousands of protestors peacefully assembled in front of the White House. Speakers at the rally included Congressman Jamie Raskin, D-Md., Neera Tanden of the Center For American Progress, Karen Hobert Flynn of Common Cause, and PFAW’s own Marge Baker. Their message was one of urgency and seriousness, as removing Mueller from the investigation has become an increasingly real possibility since Sessions was ousted. Marge Baker explained the need for Congress to respond to the events directly, stating that “[w]e’ve got to pass bipartisan legislation to protect the Mueller investigation… we’ve got to demand assurances from whomever comes in as AG that they will protect the investigation.”

As this story develops, rallies like these will continue to take place across the country, and turnout is essential to adequately express our outrage and concern. To find an event near you or to learn more about how to spread the word about the seriousness of these developments, please visit Nobody is Above the Law.