Trump and DeVos Refuse to Listen to Survivors: Title IX Coalition Rallies at Dept. of Ed. - People For the American Way
Skip to main content

Trump and DeVos Refuse to Listen to Survivors: Title IX Coalition Rallies at Dept. of Ed. 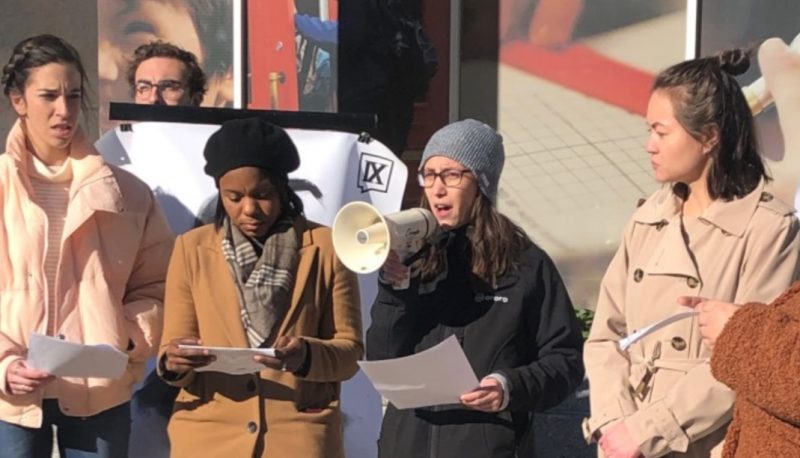 In November, Secretary of Education Betsey DeVos released a highly controversial proposal that would effectively strip student survivors of sexual assault of their basic rights by fundamentally altering Title IX, which was enacted to prohibit sex discrimination in federally funded education programs. While the Obama administration wanted to better protect sexual assault survivors by ensuring that K12 schools and college campuses have policies in place to investigate assault and harassment, Betsey Devos’s new plan would reduce their liability and inevitably dissuade survivors form coming forward.

On December 7, to protest these changes and demand that Secretary DeVos does her job in protecting all students from sexual assault and providing equal access to education, People For the American Way joined organizing groups including End Rape on Campus and Know Your IX to rally in front of the Department of Education

“If by ‘protecting the rights of respondents’ means making sure they are never held accountable, then @BetsyDeVosED has done her job.” -Sage, @knowyourIX #TitleIX #HandsOffTitleIX pic.twitter.com/SA9gN1ebGt

The rally began with speeches from Jess Davidson of End Rape on Campus and Sage Carson of Know Your IX. They explained the basics of the proposed changes and expressed outrage by the administration’s refusal to listen to or work with organizing groups who are fighting for reasonable accommodations for survivors. Davidson expressed that she was “tired of demanding that this department do their job” and explained her frustration as both a survivor and activist. Carson spoke about how these new policies would ensure that accusers are “never held accountable,” by limiting the liability of schools in these cases.

“It took more than 36 days after I filed a request for an investigation for them to begin interviewing anyone at all.” -Jessica Davidson, @endrapeoncampus #TitleIX #HandsOffTitleIX pic.twitter.com/GmNbvKvJZn

Next, survivors told their stories one-by-one. Most of the events they described took place during the Obama administration when more survivor-friendly policies were still in place. Based on their experiences, it became clear that there have never been comprehensive protections for survivors, and that the policy DeVos is proposing would only further hinder the few options survivors have. 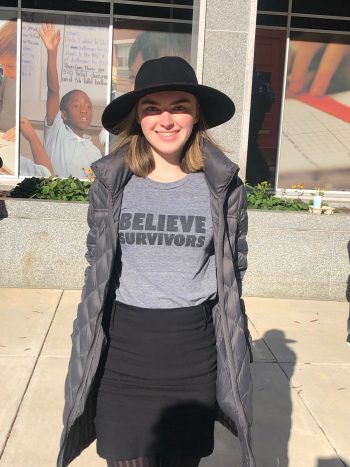 Elizabeth Tang of the National Women’s Law Center ended the rally by explaining how the new proposal will strip away what limited power Title IX attorneys currently have in pursuing legal remedies. She underscored that the system has been broken for a long time and never actually provided adequate relief for survivors. As both a survivor and Title IX attorney, she explained how this new proposal serves as an additional blow, and gave tangible examples of how the new definition is not all-encompassing or comprehensive: for example, Larry Nassar, a notorious abuser who assaulted hundreds of underage women when he worked for USA Gymnastics, would not have been held accountable under this new definition.

“If I had reported him to our school he would have said I was lying and many people would have believed him.” -Elizabeth @nwlc #TitleIX #HandsOffTitleIX pic.twitter.com/n87lRqV0dt

The new DeVos proposal is currently in a “notice-and-comment” period until January 28, which allows members of the public to voice their opinions on the proposal before it becomes legally binding. If you would like to submit a comment in opposition to these new proposals, you can do so by visiting this portal.