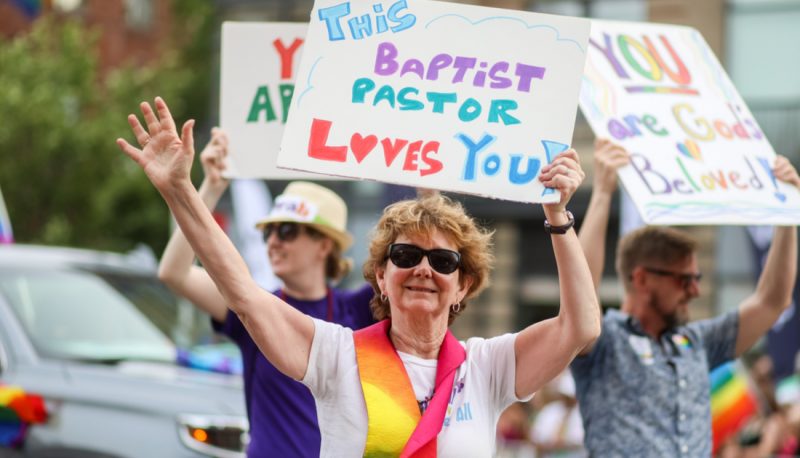 June 8, 2019: The Capital Pride Parade takes place every year on a Saturday in June between Dupont Circle and Logan Circle. Female pastors show their LGBTQ support.

Trump 8th Circuit judge David Stras wrote a 2-1 August opinion in Telescope Media Group v. Lucero that overruled a district court and ruled that a video company was likely to succeed in its claims that, based on the owners’ religious beliefs, it could violate Minnesota’s anti-discrimination law and refuse to provide services to same-sex couples. As Judge Jane Kelly explained in dissent, Stras’ decision effectively provided “’affirmative constitutional protections’ to private discrimination,” just as if it had allowed a hotel to deny “its services to an individual based on race.”

The Minnesota Human Rights Act (MHRA) prohibits discrimination by companies selling goods and services to the public based on “race, color, creed, religion, disability, national origin, marital status, sexual orientation, or sex.” Telescope Media Group (TMG) is a for-profit company that sells video and media production services to the public, and wants to sell wedding videos as well. Because of TMG’s owners’ religious beliefs against same-sex marriage, however, TMG wants to deny those services to all same-sex couples, and to include a specific statement on its website that it will not “make films promoting any conception of marriage that contradicts its religious beliefs that marriage is between one man and one woman.” Represented by the right-wing Alliance Defending Freedom (ADF), TMG filed a lawsuit in federal district court seeking to prevent the state anti-discrimination law from applying to it, thus “providing an exemption” for itself from the MHRA based on the First Amendment. (The law includes an exemption for religious and other nonprofit groups.) In short, it wanted to use the First Amendment as a sword to harm others’ rights, not a shield to protect rights.

The district court dismissed TMG’s complaint. It ruled that the MHRA serves the important governmental purpose of preventing discrimination without limiting more speech than necessary to achieve that objective, and that TMG’s other claims, including alleged violation of its owners’ rights to the free exercise of religion, were invalid as well.

On appeal, Judge Stras wrote a 2-1 opinion reversing the district court. Accepting many of ADF’s arguments, Stras claimed that the MHRA must be subjected to the highest level of First Amendment scrutiny – that it is valid only if “narrowly tailored to serve a compelling state interest” – because it is content-based as applied to TWG and compels it to convey a message TWG’s owners disagree with. There was no such compelling interest, Stras went on, in requiring TWG to express views it disagrees with concerning same-sex weddings. Even though claims under the Free Exercise Clause of the Constitution generally fail when they result from incidental burdens on religion created by “neutral, generally applicable laws” like MHRA, Stras also maintained, TWG could bring such a claim here because it is a “hybrid” argument closely linked to its free expression contentions. Stras concluded by not only reversing the district court, but also by ordering that it “must consider in the first instance” granting a preliminary injunction to TWG preventing the law from ever applying to its wedding video services.

Judge Jane Kelly strongly dissented. In claiming that the law was content-based and compelled speech, she explained, Stras had clearly confused two different types of situations. If a public accommodations law like MHRA required someone to incorporate a message they disagree with into their own speech, she went on, the Supreme Court has ruled that it compels speech and is invalid. That would be true, for example, if MHRA tried to regulate the content of a “Steven Spielberg” film, as ADF stated in oral argument. But unlike Spielberg, Judge Kelly pointed out, TWG is not an independent filmmaker making its own films or someone conveying its own message in a parade it sponsors. Instead, TWG wants to sell video services to the public, and the videos would “not primarily reflect the views of the videographer, but of the couple getting married.” It is thus clearly content neutral to require that TWG not discriminate in who it sells its services to, despite the incidental effect on expression. Judge Kelly quoted the important principle recognized by the Supreme Court just last year in the Masterpiece Cakeshop case that Stras ignored: Although the First Amendment protects religious and philosophical objections to same-sex marriage, such objections “do not allow business owners” to deny “equal access to goods and services under a neutral and generally applicable law” like MHRA.

Even if strict scrutiny applied in this case, Judge Kelly also explained, it is clear that “eradicating discrimination” based on sexual orientation is a “compelling” state interest, as the Supreme Court has held with respect to race and sex. And even if a “hybrid” religious free exercise claim is possible, she went on, it would fail here because there was no “valid free speech claim.”

Judge Kelly concluded by criticizing Stras’ opinion because it “carves out an exception of staggering breadth” to anti-discrimination laws. Precisely the same exemption, she pointed out, could be claimed by anyone selling any kind of product or service arguably related to expression, whether connected with weddings or not, such as “bakers” as well as “jewelers, chefs, tailors, or musicians.” A hotel owner could similarly deny a same-sex or interracial couple access to “the honeymoon suite” or any other room because “handing over the keys would ‘express’ an endorsement of their marriage.” In fact, Kelly noted, Stras’ logic “would apply with equal force to any business that desires to treat customers differently” based on “sex, race, religion, or disability.” In “this country’s long and difficult journey to combat all forms of discrimination,” Judge Kelly concluded, Stras’ ruling “represents a major step backward.”