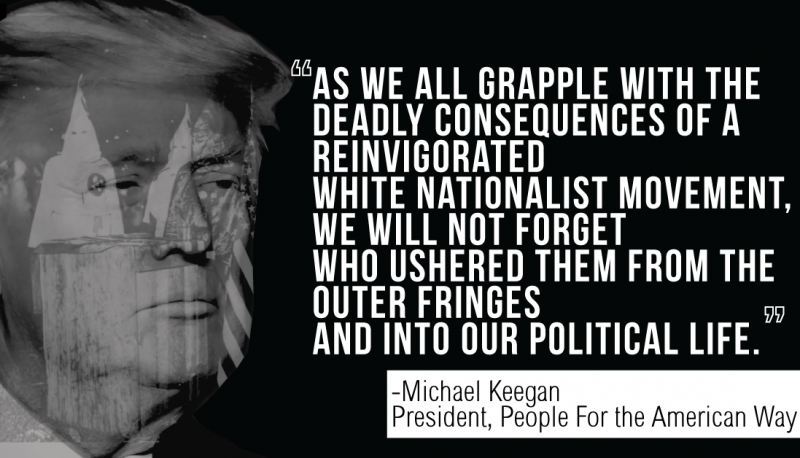 It was a sickening new low, even from a man who spent his presidential campaign energizing white supremacists and who has staffed his administration with people who cater to them.

Anyone who has been paying attention remembers that Trump’s presidential campaign was grounded in disgusting, broad-brush smears of racial and religious minorities. The fact that the neo-Nazi Daily Stormer website endorsed him less than two weeks after his immigrant-bashing launch did not seem to cause a moment’s pause or reflection. He pushed the racist lie that President Obama was not born in this country. He said an American-born judge could not be trusted because of his Mexican heritage. He retweeted white supremacist Twitter accounts—including content from a user called @WhiteGenocideTM whose profile photo showed the founder of the American Nazi Party—sending their hateful messages to a sprawling audience they could not have otherwise reached. Trump went out of his way to avoid denouncing these figures, like when he infamously failed to condemn David Duke and the KKK during a CNN interview before blaming it on a bad earpiece.

Now he’s not only defending them, he has brought them into his administration. People who used to be extremist fringe players who had no power beyond their echo chambers are now inside the White House, like Steve Bannon, Stephen Miller, and Sebastian Gorka. Their ties to white nationalism are not tenuous: Bannon previously ran a website providing a platform for white nationalist ideas. Miller was the architect of Trump’s Muslim ban and drew on a white nationalist talking point to justify policy changes attacking immigrants. Gorka is connected to a Nazi-linked group and recently insisted on a far-right radio show that “white supremacists” are not “the real problem…today.”

He and his administration have emboldened these figures, and they, in turn, have reveled in Trump’s rise, using it as a recruiting tool to draw more people to their hateful ideology. White nationalist Richard Spencer gushed in December that “Trump has unquestionably brought people to our ideas,” and this weekend former KKK leader David Duke said he and his allies were in Charlottesville to “fulfill the promises of Donald Trump.” As Right Wing Watch researchers noted last week, many of the participants in the hateful eventswere outspoken Trump supporters with records of violent rhetoric and actions.

During last year’s campaign an excited white nationalist leader said what I imagine is the only thing he has ever uttered that I agree with: “Donald Trump, whether he meant to or not, has opened this floodgate that I don’t think can be restrained regardless of what happens in the 2016 elections.” Frighteningly, this flood is gaining steam: racist organizations are already planning new events in new cities. We have to be ready to stand against them.

As we all grapple with the deadly consequences of a reinvigorated white nationalist movement, we will not forget who ushered them from the outer fringes and into our political life.