Trump Emoluments Case Shows the Importance of Protecting Our Courts 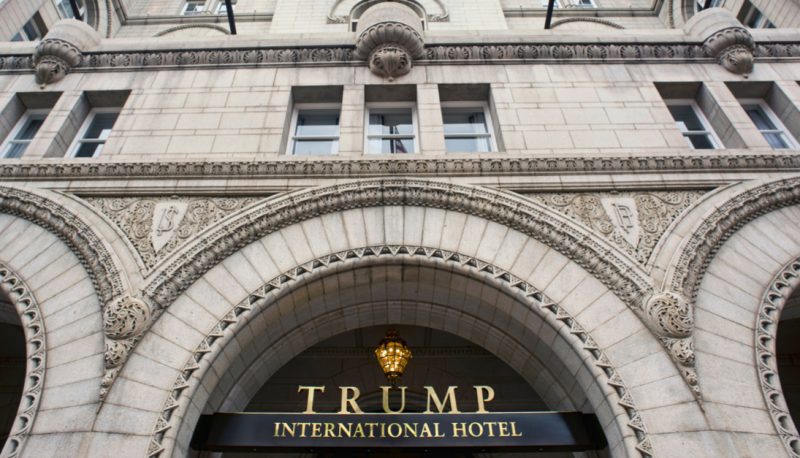 On November 2, a federal judge in Maryland issued a ruling that may pry open the door behind which Donald Trump has been hiding information about his D.C. hotel—information that may very well show the president in daily violation of the United States Constitution.

A federal judge on Friday denied President Trump’s request to stay a lawsuit alleging he is in violation of the Constitution by doing business with foreign governments, a decision that paves the way for plaintiffs to seek information from his business as it relates to his D.C. hotel.

U.S. District Judge Peter J. Messitte in Greenbelt, Md., denied the Justice Department’s request that he pause the case in order to allow a higher court to intervene. And he sharply questioned the president’s position that his business does not improperly accept gifts or payments — called emoluments — as defined by the Constitution.

By Trump’s analysis, Messitte wrote, the term emoluments is the subject of such “substantial grounds of disagreement” that payments his business received from foreign governments could not qualify. The judge did not agree: “The Court finds this a dubious proposition.”

This is one of three lawsuits alleging that Trump has been violating the Constitution’s Foreign and Domestic Emoluments Clauses, and today’s ruling exemplifies the importance of an independent judiciary. Within the executive branch, Trump demands that cabinet secretaries heap praise on him as a uniquely capable and powerful leader. Within the legislative branch, the Republican-controlled Congress refuses to exercise oversight, preferring instead to obey and collaborate.

The judiciary is different, and we have to fight to protect it. It is hard to imagine GOP officials—even the ones who on occasion meekly mouth some words of criticism without actually doing anything (yes, that’s you, Sens. Flake, Corker, Graham, and Sasse)—actually denying Trump something he wants. It is hard to imagine a Trump cabinet official telling him that one of his wild conspiracy claims is “a dubious proposition.”  And it is impossible to imagine any of them requiring him to turn over documents that could very well reveal unlawful activity.

But that’s what Judge Messitte did.  It’s why we have an independent judiciary.

And it’s one of the major reasons why Trump and his GOP cohorts are doing everything they possibly can to stack the courts as quickly as they can with narrow-minded elitists who won’t stand in Trump’s way.

As our recent Confirmed Judges, Confirmed Fears report demonstrates, Trump’s judges are already doing a great deal of damage. And just one week after Election Day, the GOP-controlled Senate will begin its lame duck session, during which Republicans will try to push through even more bad judicial nominees.

Having the GOP lose its Senate majority would provide an essential protection for our courts, starting in January. But regardless of what happens on Election Day, the weeks ahead will be a battle to protect the judicial system from bad Trump nominees.