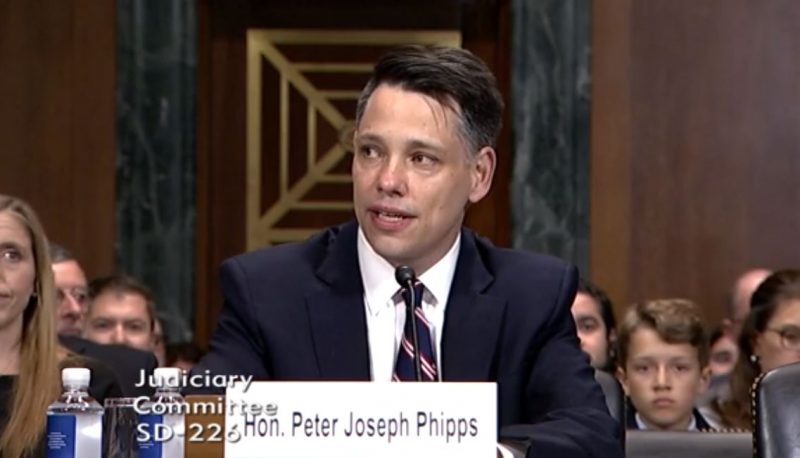 Trump Third Circuit judge Peter Phipps cast the deciding vote to affirm the dismissal of a woman’s complaint that she was sexually harassed by a store employee while she was a customer, in violation of a New Jersey law. The June 2020 case is Yucis v. Sears Outlet Stores LLC.

Elisabeth Yucis went to a Sears outlet store in New Jersey to purchase a refrigerator. She was approached by a sales manager, Len Jaffe, who made remarks to her that she later described as “inappropriate and extremely degrading.”  For example, he initially said to her “[w]hat is a pretty girl like you doing in a place like this?” After she said she was looking for a refrigerator and showed him pictures of her kitchen on her phone, he asked “[a]re there pictures on there that [I’]m not supposed to see?” After Jaffe continued to make such remarks and Yucis indicated that she no longer was interested in a refrigerator, Jaffe handed her a business card and said “[t]ext me later if you feel lonely.”

Sears refused Yucis’ attempts to resolve the matter, and she then filed suit in state court under New Jersey’s state Law Against Discrimination (LAD) which, among its other provisions, prohibits sex discrimination or harassment by places of public accommodations like Sears against their patrons. Sears was able to transfer the case to federal court, and a district court judge dismissed the case without discovery or trial, claiming that Sears was not legally responsible for sex discrimination or harassment by its employee under New Jersey’s LAD.

In a 2-1 decision in which Phipps was the deciding vote, the Third Circuit affirmed. The majority opinion claimed that Yucis’ complaint “lacks allegations giving her a plausible claim” that Jaffe’s actions were within the scope of his employment or that Sears was otherwise responsible for them. Phipps added a concurring opinion in which he argued that New Jersey precedent requires “plausible allegations” that Jaffe’s offensive conduct was “designed to discourage” Yucis’ use of the Sears store.

Judge Theodore McKee strongly dissented. Based on Yucis’ complaint, McKee explained, a jury could “readily conclude” that Jaffe was “acting within the scope of his employment when he sexually harassed” her when she was seeking to buy a refrigerator. McKee was particularly critical of Phipps’ arguments, noting that under New Jersey precedent, the LAD is “not limited” to conduct “designed to discourage” use of a public accommodation. Such an intent requirement, McKee went on, “undermines the broad remedial purpose”” of the New Jersey law, and would be “particularly damaging” in sexual harassment cases. Yucis’ complaint contended that Jaffe’s “persistent, unwelcome sexual remarks embarrassed and humiliated her, and discouraged her from shopping at Sears,” McKee concluded, and she should have been allowed to proceed with her case.

As a result of Phipps’ deciding vote, however, Yucis will be prevented from seeking justice for the sexual harassment committed against her. The result may well damage other women seeking redress under New Jersey’s LAD as well.