Trump Judge Rao Would Have Ruled That Guantánamo “Detainees” Have No Due Process Rights: Confirmed Judges, Confirmed Fears - People For the American Way
Skip to main content 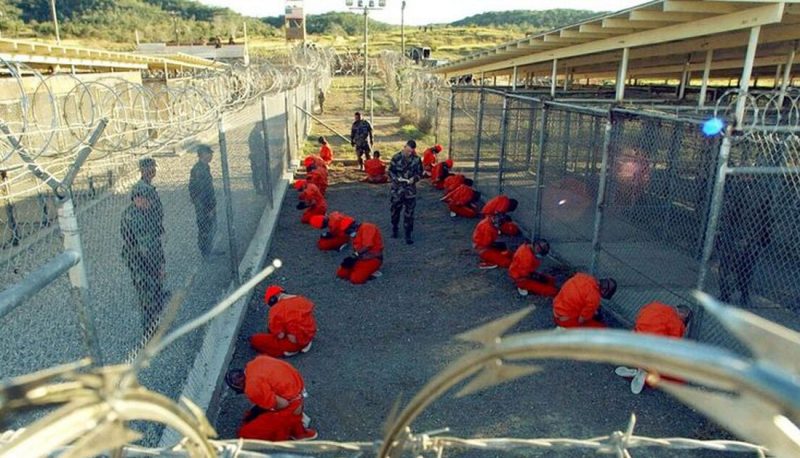 Detainees in orange jumpsuits sit in a holding area under the watch of U.S. military police at the temporary Camp X-Ray, which was later closed and replaced by Camp Delta, inside Guantanamo Bay naval base.(Handout/Reuters)

Trump judge Neomi Rao was one of only two judges on the D.C. Circuit to dissent in a September case called Qassim v. Trump, protesting the 8-2 majority’s refusal to review en banc a panel opinion recognizing that people imprisoned indefinitely on Guantánamo have at least some Fifth Amendment protections. The supermajority included George W. Bush-nominated judge Thomas Griffith. Rao joined a dissent authored by Judge Karen LeCraft Henderson. (The other Trump judge on the court, Greg Katsas, did not participate in the case.)

Khalid Ahmed Qassim, who has been imprisoned without trial on the island since 2002, filed a petition asking for several procedural due process protections in the hearing the government says he will have. For instance, he does not want the government to rely on information obtained through coercion, and he wants the right to cross-examine witnesses. The district court denied his petition. A unanimous three-judge panel opinion reversed the lower court in a ruling that the full circuit has now declined to reconsider.

The dissent Rao joined cited a 2010 D.C. Circuit precedent called Kiyemba v. Obama. In that case, the court made the statement that the Due Process Clause of the U.S. Constitution “does not apply to aliens without property or presence in the sovereign territory of the United States.”

But as Judge Patty Millett explained in her majority opinion for the panel, Kiyemba was a case about substantive due process and had nothing to do with procedural due process, which is what Qassim is about. Judge Millett also demonstrated that “no subsequent decision of this court has read Kiyemba as walling off Guantánamo Bay detainees from all constitutional procedural protections.” She provided several examples of post-Kiyemba cases in which the D.C. Circuit assumed, without deciding, that the prisoners of Guantánamo have such protections. “We would not have repeatedly reserved such Due Process Clause questions if they had already been conclusively answered in Kiyemba.”