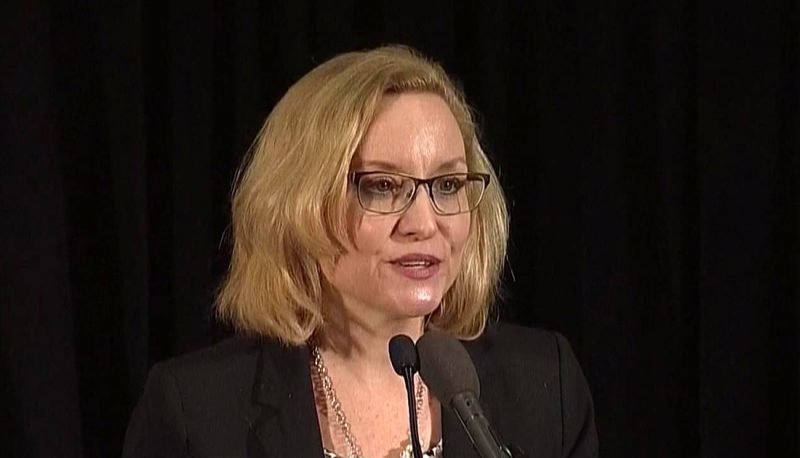 Trump Sixth Circuit judge Joan Larsen dissented from a ruling that three police officers were not entitled to qualified immunity for violently shooting and tasering a man during a mental health episode. The April 2020 case was Graves v. Malone.

One day in July 2015, Michigan resident Ronnie Graves experienced “severe” schizophrenic hallucinations, and heard voices in his head telling him that he was going to be killed. During this psychotic condition, Graves stabbed his grandmother with a knife. When Monroe County Police Sergeant Gary Hedger and Deputy Officers Kurt Potratz and Charles Myers arrived on the scene, they learned that the grandmother had gone to a neighbor for help. The knife blade was secure, and Graves had retreated to the bathtub in the mobile home he shared with his grandmother. Upon arriving, Officer Portraz immediately went to retrieve his AR-15.

Graves, still in a state of psychosis, did not comply with the officers’ commands to show his hands, and Officers Myers and Portratz shot him. One of Portratz’s AR-15 bullets was powerful enough to go through Graves’ cheek, and through two other trailers. Immediately after that, Hedger tasered a non-responsive Graves, whom he later admitted was non-responsive and probably in shock. The officers arrested Graves and he was found not guilty by reason of insanity.

As a result of the officers’ actions, “Graves is completely blind in his right eye. His face is severely disfigured. He no longer has a right cheekbone and his sinus cavity is exposed … His nose remains broken, and his right nostril has caved in and will not permit air to flow to his lungs. He suffers from headaches and constant jaw pain.”

Graves filed a Fourth Amendment suit alleging excessive force against all three police officers, also charging Sgt. Hedger with failure to supervise the other two. A district judge granted qualified immunity to all three officers and dismissed the case, and Graves appealed.

All three judges on the panel agreed that the lower court properly dismissed the failure to supervise claim. But in an opinion by Chief Judge Guy Cole, the majority ruled that qualified immunity was improperly granted to the three officers for their actual use of force.  He explained that when construing the facts in a light most favorable to Graves, as is required in considering such a pre-trial ruling, a reasonable person would be skeptical of both Meyers’ and Portratz’s account of the facts, that it was “objectively unreasonable” to use a taser against a person in an “incapacitated” position, as Graves was, and that a jury could well find that the officers “violated a clearly established constitutional right” by shooting and tasering Graves.

Trump judge Larsen dissented, claiming that Graves was objectively in a position where he could pose a threat to Officers Meyers and Portratz, and that no case law would support Hedger not receiving qualified immunity for tasing Meyers. The majority clearly disagreed. They explained that the case law referred to by Larsen said that use of a taser was objectively reasonable only where an incapacitated person had previously resisted arrest and was “expected to continue resisting,” which was not true in this case. As to the assertion that Graves posed a threat to the other officers, the majority concluded that the facts “tell a different story” and that a reasonable juror “might decline to credit” the officers’ account.

The majority accordingly sent the case back to the district court so that a jury could determine whether the officers should receive immunity for the severe injuries they caused to Graves.

Like communities of color, law enforcement disproportionately uses excessive force against people with mental illnesses, and should be held accountable for their actions in court. If it had been up to Larsen, however, Graves would never have that opportunity, and the court would have set a dangerous legal precedent for people in the Sixth Circuit.

Note: The initial draft of this post was prepared by PFAW legal intern Oliver Telusma.