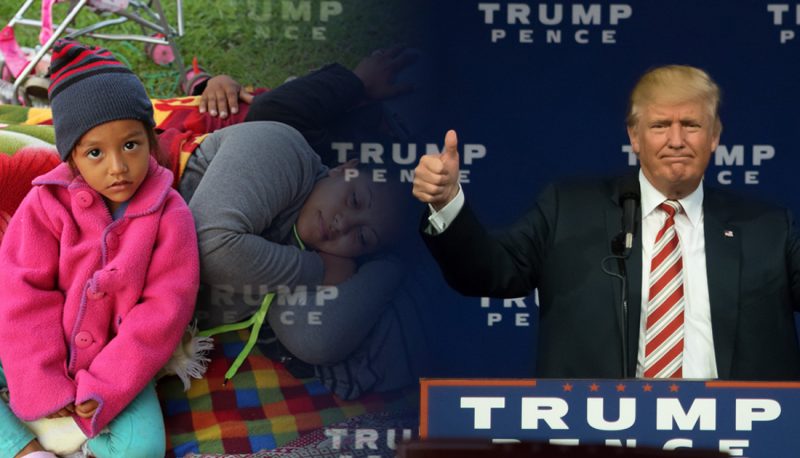 Left: A Salvadoran family fleeing poverty and gang violence wakes up at dawn at an ad hoc migrant shelter at a sports field near the U.S.-Mexico border in November 2018. Right: Trump at a campaign rally in September 2016.

On August 16, Trump 9th Circuit judge Mark Bennett cast the deciding vote to partly reverse a lower court order and allow the new Trump administration rule that bars almost all Central and South American asylum seekers at the U.S.-Mexico border to go into effect except in California and Arizona, while a challenge to the rule is pending. As a result, the rule is now in effect in Texas and New Mexico. The case is East Bay Sanctuary Covenant v. Barr.

In July 2019, the Trump administration issued an interim final rule that forbade most immigrants fleeing danger, violence and abuse in Central and South America from seeking asylum at the U.S.-Mexico border. In response to a challenge stating that, among other problems, the asylum rule violated the Administrative Procedure Act (APA), federal Judge John Tigar in San Francisco issued a preliminary injunction covering the whole country blocking it from taking effect. The administration immediately appealed and asked the 9th Circuit to stay the lower court order and allow the rule to take effect while the case was going forward.

The three judges who heard the motion agreed that the administration has failed to make the “required ‘strong showing’ that they are likely to succeed” on their claim that the rule was lawful under the APA since it did not comply with the APA’s “notice-and-comment and 30 day grace period requirements.” Despite that failure, however, the panel ruled 2-1 to grant the government’s motion for a stay outside the 9th Circuit, with Judge Bennett providing the deciding vote in an unsigned opinion. The majority criticized the district court for granting a nationwide injunction, affecting states like Texas and New Mexico that are not part of the 9th Circuit, even though the asylum rule itself is nationwide in scope. According to the majority, the court improperly failed to consider specifically “whether nationwide relief is necessary to remedy Plaintiff’s alleged harms.” The majority set the case for argument in December, and also stated that the lower court could in the meantime “further develop the record” to extend the injunction nationwide.

Judge Wallace Tashima strongly dissented. Since the three-judge panel only had before it the government’s motion for a stay and not the merits of the case, it did not have the authority to “parse the record” looking for error or to send the case back to the lower court to further develop the record. Instead, Tashima explained, the judges’ unanimous conclusion that the government had failed to make the “required showing” that it would likely succeed on the merits meant that the stay motion should simply be denied. The majority’s “rush to address the nationwide aspect of the injunction,” he noted, was plainly improper. But the majority’s “split decision” will raise “new and difficult problems,” Tashima concluded, including applying asylum law “differently in Texas than in California” while the appeal is pending.

In fact, while continuing to claim that the injunction should have been blocked completely, the White House immediately stated that the administration will now proceed to “apply the rule” everywhere “outside of the Ninth Circuit.” Even if the rule is blocked completely after the court rules on the merits, it will nonetheless endanger the safety and wellbeing of thousands of Central and South American asylum seekers caught in the administration’s cruel web of anti-immigrant policies and practices.