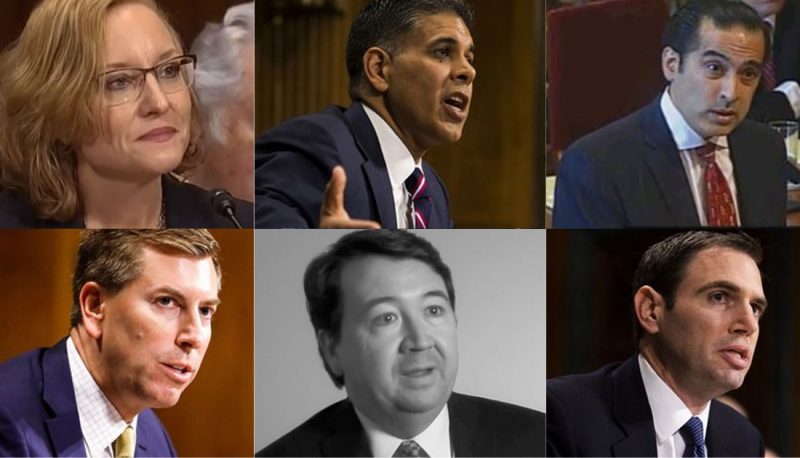 CIC Services v. Internal Revenue Service was a straightforward case involving a company trying to sue the IRS over new disclosure regulations. But in August 2019, all six of Donald Trump’s judges on the 6th Circuit used it as an excuse to issue a jeremiad against the federal government and the authority of Congress to effectively address national problems.

This case concerned a tax avoidance scheme involving “abusive micro-captive insurance shelters.” (Fortunately, what that actually means isn’t relevant to this post.) The IRS adopted reporting requirements for “captive insurance companies,” which would help it determine whether they were legitimately set up to provide insurance or whether they were simply tax shelters instead. One of those businesses—CIC Services—challenged the disclosure requirements in court.

But their case was dismissed due to a law called the Anti-Injunction Act (AIA). Under the AIA, you can’t try in advance to stop a tax or IRS fine but can sue after you’ve paid it. Since CIC hadn’t paid any fine yet, the district court dismissed its case—a decision that was affirmed by a three-judge panel of the Sixth Circuit. Now the circuit has denied en banc review, with a dissent by Judge Amul Thapar (and joined by all five of the court’s other Trump judges, as well as George W. Bush nominee Raymond Kethledge).

As his dissent made clear, Thapar is not a fan of the IRS, of the federal government, or of the long-standing Supreme Court precedents recognizing the constitutionality of federal agencies. Indeed, Judge Eric Clay wrote separately to sharply criticize his colleagues for “their latest attempt to inflict death by distorted originalism on the modern administrative state.”

As Judge Thapar saw it, the AIA didn’t even apply, because CIC wasn’t challenging a tax or a fine; it was simply challenging the regulatory aspect of a tax or fine. But as Judge Clay observed, the Supreme Court has consistently ruled that the AIA “cannot be sidestepped by such nifty wordplay.” Invalidating the disclosure requirements, he explained, would necessarily also invalidate the fines before they were paid, exactly what Congress acted to prevent in passing the AIA.

Clay criticized the dissenters for basing their argument on “a plethora of policy concerns.” For instance, Thapar wrote:

In recent years, the agency has begun to regulate an ever-expanding sphere of everyday life—from childcare and charity to healthcare and the environment.

Thapar’s anti-government bent came through again with his assertion that:

But, as Clay explained, the case Thapar cited has nothing to do with the Anti-Injunction Act, which under Supreme Court precedent “creates an exception to the general administrative law principle of pre-enforcement judicial review,” an exception that applies “even in the gravest of circumstances, such as the violation of individuals’ constitutional rights.”

The extent of Thapar’s zeal to dramatically rewrite the Constitution to weaken the federal government came through when he argued that application of the AIA in this case violates the separation of powers—an issue that he called the “elephant in the room” since no party raised it. As Judge Clay explained:

My colleagues also opine about a supposed “elephant in the room”—the fact that “the IRS (an executive agency) exercises the power to tax and destroy, in ways the Founders never would have envisioned.” Yet the Founders’ expectations about how Congress would wield the power bestowed on it by the Constitution are entirely irrelevant to the case before this Court. This is a case about statutory interpretation, not about the constitutionality of the so-called administrative state, or even the constitutionality of the AIA. My colleagues thus misstep in letting their hostility toward the IRS, rather than traditional tools of statutory construction, guide their analysis. Apparently, it is no cause for doubt or self-reflection by my dissenting colleagues that no one else, including the parties litigating this case, can see the elephant.

Several George W. Bush-appointed judges did not join Thapar’s dissent, including Judges Julia Gibbons, Richard Griffin, and noted conservative Jeffrey Sutton, who wrote separately to note that the Supreme Court could take up the issue but that he was not supporting rehearing.

Trump’s judges are engaging in an increasingly open campaign to rewrite the Constitution to advantage the wealthy and powerful, in line with the agenda of the Federalist Society and its funders. The only elephants in the room are the Republicans who have made this project a priority.