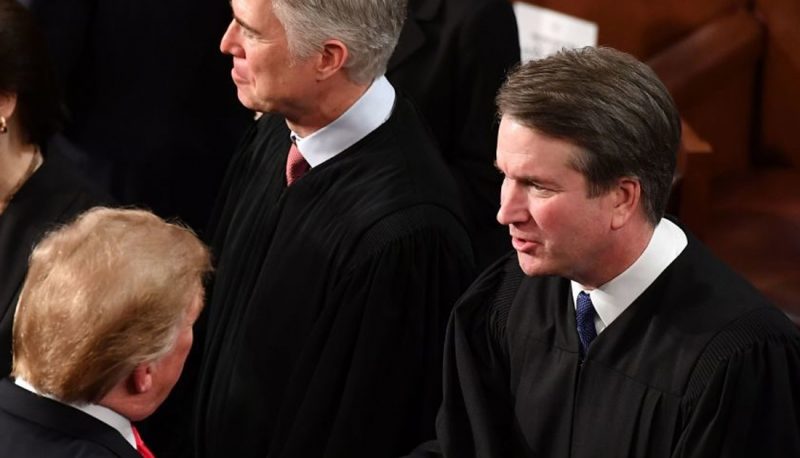 Trump justices Brett Kavanaugh, Neil Gorsuch, and Amy Coney Barrett cast key votes to invalidate part of a Congressional law that prevented the director of the Federal Housing Finance Agency (FHFA) from being fired at-will by the President and to further weaken Congress’ authority to insulate agency officials from political pressure.  The June 2021 decision was in Collins v Yellen.

As explained in an earlier post, as part of a law signed by President Bush to deal with the mortgage and financial crisis a decade ago,  Congress established FHFA as an independent agency headed by a director who was nominated by the President but could be fired by him only for cause. Among its other activities, FHFA helped to stabilize the serious instability of Fannie Mae (the Federal National Mortgage Association) and Freddie Mac (the Federal Home Loan Mortgage Corporation) caused by toxic subprime home mortgage loans by arranging for the Department of the Treasury to provide over $200 billion in financing, in return for an agreement to delay paying dividends to shareholders and pay back the loan expeditiously.  The shareholders filed suit, claiming among other things that the FHFA director’s action was improper because the law providing for his appointment but insulating him from at-will removal by the President was unconstitutional. In a decision that Trump judges helped make possible, the Fifth Circuit agreed with this and several other shareholder claims, and the case went to the Supreme Court.

In an opinion joined by Trump justices Kavanaugh, Gorsuch, and Barrett, as well as by Chief Justice Roberts and Justice Thomas, Justice Alito rejected statutory claims raised by the shareholders but agreed with the Fifth Circuit’s ruling that Congress’ protection of the FHFA director from being removed at will by the President violated the Constitution. Alito claimed that the result was “dictate[d]” by the decision  made possible by Trump justices last year in Seila Law v CFPB, where the majority eliminated the independence of the Consumer Financial Protection Bureau (CFPB) by ruling that Congress could not insulate the CFPB director from being fired at will by the President.  Alito sent the FHFA case back to the lower courts to determine whether the “unconstitutional removal provision inflicted harm” to the shareholders and entitled them to some limited form of “retrospective relief.” Justice Gorsuch would have gone further, arguing that the Court should have ordered the Fifth Circuit to “set aside” at least some of the key decisions made by the FHFA director.

Although they reluctantly stated that they needed to follow the CFPB decision because of respect for precedent, Justices Stephen Breyer, Elena Kagan, and Sonia Sotomayor strongly disagreed with Alito’s majority opinion. Justice Sotomayor wrote a partial dissent, joined by Justice Breyer, explaining that this latest example of striking down the “tenure protections provided by Congress to an independent agency’s leadership” simply “cannot be squared” with the Court’s prior precedents, including the CFPB decision. Justice Sotomayor pointed out that in the Seila Law ruling, the majority had limited its holding to agencies with “significant executive power,” and had specifically distinguished the FHFA because it does not have what it called  “regulatory or enforcement authority remotely comparable to that exercised by the CFPB.” Contrary to that limitation, Sotomayor went on, the majority now suggested that it is “not well-suited to weigh the relative importance” of the authority of different agencies, that the “constitutionality of removal restrictions” does not depend “on such an inquiry,” and that therefore, as Sotomayor put it, “exercising essentially any executive power whatsoever is enough” to rob Congress of the authority to limit the President’s removal authority in order to help make officials less susceptible to political and other pressures. Sotomayor concluded that the Court’s decision “reaches further than ever before” into depriving Congress of the authority “it has long possessed to make officers like the FHFA Director independent from Presidential control.”

Although technically concurring in the judgment because she thought the FHFA arguably does have “significant executive power,” Justice Elena Kagan was similarly critical of Alito’s opinion because it “rests on faulty theoretical premises and goes further than it needs to.” She criticized what she called the majority’s “deeply flawed” view that allowing the President to remove executive branch officials at will is important to ensure proper “electoral accountability,” a viewpoint that Kagan pointed out was not shared by the Founders and significantly limits Congress’ authority. Kagan also condemned the majority for its “extension of Seila Law’s holding” because it ignores and “careens right past” the limitation of that decision to agencies with “significant executive power,” as discussed by Sotomayor. Kagan pointedly noted that “fidelity to precedent also places demands on the winners” and that it was improper for the majority to “widen” the reach of the CFPB ruling  “unnecessarily at the first opportunity” as the majority did in this case.

In the short run, the Court’s ruling will allow the replacement of the Trump-appointed head of the FHHA, who has received significant criticism. In the longer run, however, as with its recent decision in the case concerning patent judges, the FHFA decision is clearly a part of the current Court’s effort, made possible by Trump justices, to undermine the social safety net and roll back the New Deal by making it difficult or impossible for Congress to insulate agencies and officials that protect Americans’ health, safety, and consumer and economic interests from political pressure and influence. As Justice Breyer noted in that case, the Founders “wrote a Constitution that they believed was flexible enough to respond to new needs,” including those addressed by the “New Deal,” but the majority’s approach clearly harms the Founders’ objective of allowing Congress and the Executive to “implement” key tasks and gives too much authority to “unelected judges.”

As Justice Sotomayor wrote in the FHFA case, the Court’s “encroachment on Congress’ authority” to insulate some agency officials from political pressure and removal now extends even to agencies like the “Comptroller of the Currency” and the “Social Security Administration.” To help counter the improper actions by Trump justices and judges to roll back the social safety net and repeal the New Deal, it is critical that President Biden nominate and the Senate confirm appellate judges and justices who are fair-minded constitutionalists who will respect the proper scope of Congress’ authority.