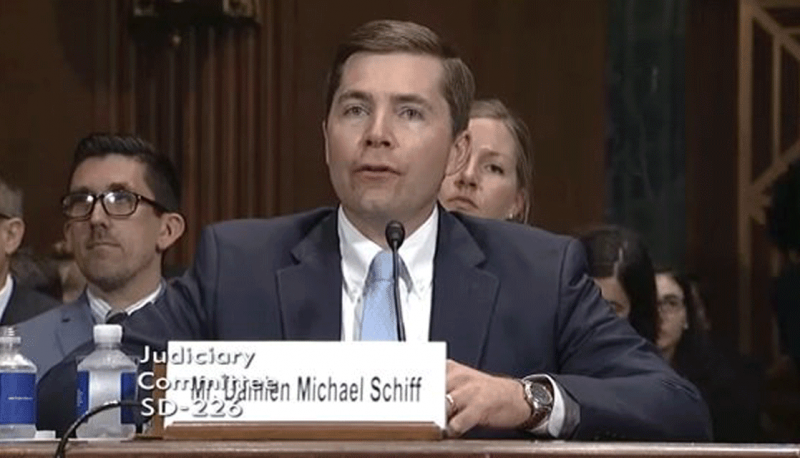 Trump’s Judges: This is Not Normal

Damien Schiff, President Trump’s nominee to the Court of Federal Claims, is being groomed by the far Right for an eventual seat on a circuit court or even the Supreme Court. That is one of the reasons his nomination has drawn so much attention. However, when he was nominated, it was clear from his long and troubling record that the Judiciary Committee should reject Schiff’s nomination. His recently submitted responses to committee members’ written questions for the record (“QFRs”) provide new reasons that he should not be confirmed.

On issue after issue, Schiff rebuffs questions that were prompted by his own writings and statements, including in his confirmation hearing.

An Enormous Leap Backward: Undoing the New Deal and the Great Society

Schiff, like some other ultra-right legal thinkers, apparently believes that much of what the federal government does today is actually unconstitutional. Ranking Democrat Dianne Feinstein and Sen. Dick Durbin asked Schiff about an article in which he longed for a far-right Supreme Court that could “overturn precedents upon which many of the unconstitutional excrescences of the New Deal and Great Society eras depend.”

The Supreme Court long ago recognized Congress’s authority to establish programs such as Medicare and Social Security, create agencies such as the SEC and the EPA, and legislate to achieve goals such as worker safety and nondiscrimination. However, the far-right “Constitution in Exile” movement believes that since the late 1930s, the Supreme Court has granted the federal government vastly more power than permitted by the Constitution. To find out what Schiff believes, Feinstein and Durbin asked him to specifically identify the precedents he was talking about that allow the “unconstitutional excrescences” of the New Deal and Great Society.

I do not recall the particular decisions I had in mind when I wrote that blog post. Should I be confirmed and appointed as a Judge of the Court of Federal Claims, I solemnly pledge to apply all precedents of the Supreme Court from all periods of history, including from the New Deal and Great Society eras. To the extent that the question seeks my personal views on any such precedents, please see the final paragraph of my response to Question 2.a [stating his personal views would be irrelevant, and that he would “decide all matters strictly according to the law and the facts”].

He doesn’t recall? It is simply not credible that a leading legal thinker with strong beliefs about the meaning of the Constitution would write that and not recall even a single case—just one—that he had in mind. No one reading his response could possibly believe it.

Refusal to Discuss His Approach to Constitutional Interpretation

Schiff, like fellow conservative John K. Bush, claimed that his approach to interpreting the Constitution is irrelevant to the Senate’s consideration, even refusing to discuss his own past statements on the matter. For instance, Sen. Coons asked Schiff to address certain criticisms of originalism. Schiff responded simply:

Respectfully, my personal views on the critiques of originalism would not be relevant to my role as a judge. If confirmed, I would decide all matters strictly according to the law and the facts.

Similarly, Sen. Blumenthal noted Schiff’s frequent references to “natural law” in his writings and asked, reasonably enough, how that concept might factor into his judicial decisions. But rather than answer the question, Schiff wrote his way around it:

I am aware of no Supreme Court decision that has authorized the use of natural law to limit the scope of the states’ police powers. Accordingly, I am not aware of any Supreme Court precedent that would justify the invalidation of the exercise of such powers on that ground. Were I to be confirmed and appointed as a Judge of the Court of Federal Claims, I would strictly adhere to all Supreme Court precedent. To the extent that the question seeks my personal views on natural law, please see the final paragraph of my response to Question 1.

After reading that, we still don’t know what Schiff believes about “natural law.” He promised to follow Supreme Court precedent, but suggested there is none. Without precedent, Schiff’s beliefs about natural law would have an enormous and direct impact on how he interprets constitutional provisions. It isn’t a question of personal views or specific legal questions, but of how Schiff would do his job.

And clearly, that is something he wants to hide.

Assumption that Environmentalists Have a Malevolent Agenda

Before his nomination, Schiff wrote that environmentalists “push an agenda that has more to do with stifling productive human activity than fostering ecological balance,” and that certain environmental laws “are enforced not for the public’s benefit but to stop productive activity that activists or bureaucrats dislike.” Sens. Blumenthal and Whitehouse asked how environmental parties could feel he would hear their cases impartially after having imputed malevolent motives to them.

Schiff replied that, in his opinion, none of his writings can be fairly read to say that environmental litigants shouldn’t be treated fairly in court. But his statements impugning their motives are unambiguous, and he did not disavow them. It’s hard to imagine an environmental litigant not having questions about Schiff’s impartiality, especially when they are opposing something that Schiff has previously stated is a “productive human activity.”

Schiff also noted the difference between advocacy and judging: lawyers are supposed to zealously represent their clients, and many such advocates become successful judges. But that is a straw man. Writing articles impugning the honesty and motives of an entire class of litigants is a far cry from presenting whatever legal arguments you think might help your client in a specific case, regardless of whether you personally agree with them.

Some of the QFRs followed up on questions about his prior statements suggesting hostility to LGBTQ people. For example, Schiff had written an article called “Teaching Gayness” about an anti-bullying program in the public schools. He criticized the parts of the program that he described as presenting the “homosexual lifestyle” as good and “homosexual families” morally equivalent to “traditional heterosexual families.” The basis of his criticism was that there is not yet a societal consensus on the “moral implications of homosexuality.”

In the QFRs, both Sen. Franken and Sen. Whitehouse asked him to explain the title and article. Schiff’s responses revealed that he reduces the lives of “homosexuals” to sex, something he does not do for heterosexuals.

Schiff: By teaching “gayness,” I meant the concept of a school going beyond teaching that bullying, for any reason, is bad, and instead extending its curriculum into teaching about the morality of physical intimacy by persons of the same sex.

Schiff: By “homosexual lifestyle” I meant the desire to engage in, and the engaging in, physically intimate activity with a person of the same sex.

Public schools have long taught about “traditional heterosexual families” without any hint whatsoever that there might be “physically intimate activity” between the parents. Why? Because that is not how families are defined, and there is much, much more to a husband and wife’s life and relationship than sex.

This has long been a staple of Religious Right propaganda, and it has no basis in reality. Regardless of whether his belief is based on animus or ignorance, someone with such a fundamental misunderstanding about a core matter of equality should not be elevated to the federal bench. Judges who are closed to facts that they don’t like are unlikely to provide every party their fair day in court.

Damien Schiff needs to put down his 30 year-old copy of Bowers v. Hardwick and realize that it has been overruled, as have the totally inaccurate assumptions that served as the basis of that notorious case. The Supreme Court now recognizes LGBTQ people as fully human.

Schiff’s QFRs showed more of his discomfort with inconvenient facts when he refused to answer a simple question from Sen. Whitehouse. In 2008, the California Supreme Court ruled that laws that discriminate on the basis of sexual orientation should—like those based on race—be subjected to the highest level of judicial scrutiny. At the time, Schiff predicted far-ranging and (in his view) negative effects. Whitehouse asked: Has that come true? Have there been any such effects in the nearly ten years since then?

Schiff was unable to provide any, and he did not try. He told Whitehouse he’d simply meant that there would continue to be significant division over the issue. And, he added, it would not be appropriate to express his personal views.

Schiff had made a factual prediction. Disclosing whether any of it had turned out to be accurate is not asking for his personal opinion. It is asking him for facts—facts that he clearly is not comfortable with because they may conflict with his anti-LGBTQ worldview.

Sens. Feinstein, Durbin, and Hirono all asked Schiff to explain a law review article he authored on affirmative action. In the 2003 Grutter v. Bollinger case, the Supreme Court upheld a public university’s limited affirmative action program (on the same day it struck down its law school’s program for being too much like a quota). Schiff described Grutter as a historic mistake along the lines of Dred Scott, Plessy, and Korematsu, which protected slavery, permitted Jim Crow, and upheld concentration camps for Americans of Japanese ancestry.

When asked in the QFR to explain how the affirmative action case was like these three infamous cases, Schiff gave a response that was less than convincing:

Oh, that’s all, no other reason. Of all the Supreme Court’s bad decisions dealing with race and the Constitution, he just happened to pick the three most inflammatory ones.

It is very hard to believe that an author would analogize Grutter to these three infamous cases without trying to suggest that the underlying practice in Grutter was equally horrific as those in the other three cases.

Schiff’s now-famous blog post calling Justice Anthony Kennedy a “judicial prostitute” rightfully got a lot of attention at the confirmation hearing, and that continued in the QFRs. At the hearing, he claimed that he was only criticizing a style of judging that neither Justice Kennedy nor anyone else on the Supreme Court uses, but which people might mistakenly believe Kennedy uses due to misleading media coverage of how he decides cases. (His blog post began by quoting from a SCOTUSBlog comment about Kennedy.) Sen. Feinstein was among the senators who found this explanation hard to swallow—very hard to swallow:

Feinstein: You authored a blog post describing a sitting Supreme Court Justice as a “judicial prostitute,” then told the Senate Judiciary Committee under oath that the point of your blog post “was not to impugn or malign any person.” To say the least, your explanation strains credulity. With a reminder that your written responses are also considered testimony—just like your oral responses at the hearing were—I want to give you another opportunity to explain your provocative criticism of Justice Kennedy in your 2007 blog post. [emphasis in original]

Schiff simply repeated his explanation and offered an apology “to anyone who may have taken offense.”

We knew a great deal about Schiff before his confirmation hearing. Those hearings and the follow-up QFRs are intended to let senators learn more about the nominee, and to let the nominee address their concerns.

The QFRs certainly accomplished their goals. On issues of both character and legal substance, Schiff has provided the committee with even more evidence that he is wholly unsuited to become a federal judge.