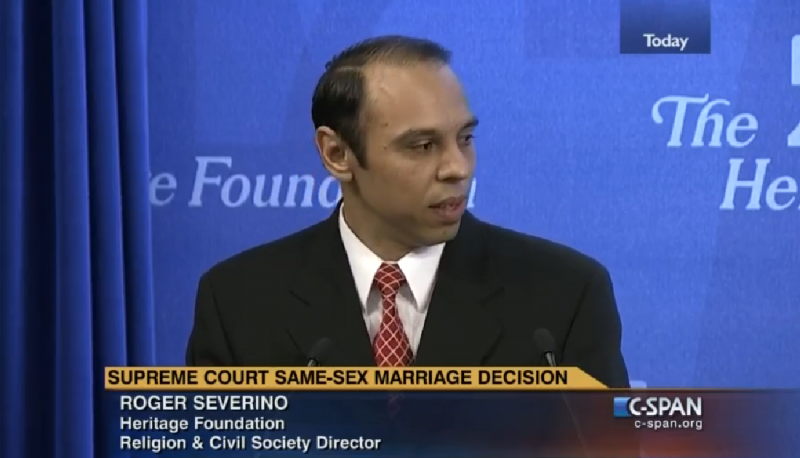 Who Is Weaponizing Religious Liberty?

In a move that brought a startling clarity to the end game for “religious liberty” claims made by Religious Right political and legal groups, the Department of Health and Human Services last week granted a waiver from federal non-discrimination rules to South Carolina, allowing the state to continue funneling tax dollars to Miracle Hill, a child welfare agency that refuses to place foster children with Jewish or Catholic families—or anyone who doesn’t share Miracle Hill’s conservative evangelical religious doctrine. The waiver also applies to all other South Carolina faith-based foster care agencies.

“Under Miracle Hill’s policies, not only Jews are rejected” as potential mentors and foster parents, reported the Religion News Service. “Muslims, Hindus and atheists are also barred from fostering or mentoring children in the nonprofit’s programs; so too are Catholics.” Don’t even ask about same-sex couples, even if they’re Protestant. Miracle Hill has reportedly received millions of dollars from the state and federal governments.

What makes this development even more jaw-dropping is that at the very same moment the Trump administration is deferring to the far right and approving this taxpayer-funded religious discrimination, the right-wing Judicial Crisis Network is promoting a video dishonestly accusing Democratic senators of anti-Catholic bigotry over their questioning of judicial nominees.  A previous JCN ad attacking senators over their questioning of appeals court nominee Amy Coney Barrett was actually entitled “Catholics Need Not Apply.”

The smears against the senators are false, and reflect a strategy meant to smooth a path to the Supreme Court for Barrett, who some Religious Right leaders have called God’s anointed choice to fill the next vacancy. But in the case of Miracle Hill, an actual “No Catholics Need Apply” rule has been given formal approval by South Carolina’s governor and the Trump administration.

In pushing for broad religious exemptions from nondiscrimination laws, Religious Right groups have almost always made gay people and same-sex couples the bad guys—the ones religious social service agencies and business owners don’t want to be “forced” to serve. The idea that businesses could use the same principle to return to a time when it was legal to discriminate against, say, interfaith couples, is no longer theoretical.

Miracle Hill says it works with “Christian” families. But when it says “Christian,” it really means Protestants, and only those who meet the agency’s religious standards. No one else.

Allowing this kind of discrimination with tax dollars is a huge change. Federal civil rights rules have at times allowed religiously affiliated social service agencies to restrict staff hiring to people with similar religious beliefs. But that rule has never applied to the provision of services with taxpayer money. In other words, a church-affiliated charity that gets government funding to help feed or house poor people may be able to hire only Christian staff, but it couldn’t—at least up to now—feed only the right kind of Christian poor people.

And yet the Trump administration and its Religious Right cheerleaders characterized the waiver as a victory for religious freedom. “The government should not be in the business of forcing foster care providers to close their doors because of their faith,” said Lynn Johnson, assistant secretary of the HHS Administration for Children and Families. “Religious freedom is a fundamental human right.”

The Religious Right’s long campaign to redefine “religious liberty” has taken a core constitutional principle that is meant to be a shield protecting Americans’ free exercise of religion, and turned it into a sword against nondiscrimination laws. That sword, it is now clear, will not only be used to target LGBTQ people, but anyone who doesn’t embrace the Religious Right’s worldview.

Russell Moore, head of the Southern Baptists’ Ethics and Religious Liberty Commission, praised the Miracle Hill waiver, saying, “Culture wars shouldn’t stand in the way of those seeking to care for children in need.” But allowing state-funded agencies to reject an experienced foster mother on the basis of her religious beliefs—like a Jewish woman turned away by Miracle Hill—denies vulnerable children access to qualified care providers.

The same goes for rejecting same-sex couples. As ThinkProgress recently noted, “LGBTQ children are over-represented in the foster care system, so the more a state’s child placement services are controlled by anti-LGBTQ agencies, the more susceptible those children are to being placed with families that will reject them for who they are.”

The Trump administration’s move makes both state and federal governments complicit in explicit discrimination against non-Christians and Christians who don’t meet conservative evangelicals’ approval. The Anti-Defamation League has rightly called it a “dangerous precedent.” That’s especially true in an era in which Christian nationalists and dominionists are committed to building more political power.

The Department of Health and Human Services was a top takeover target for Religious Right groups who helped put Trump in the White House. The new waiver is just the latest sign of the extraordinary and damaging influence on policy that Religious Right activists have in the Trump administration.