In that case, a child with autism was clearly not making sufficient progress in public school. Teachers helped him develop some skills at school, but were unable to help him learn to use those skills anywhere outside of the school. His parents argued that this was insufficient and sought a particular remedy, but Judge Gorsuch wrote a panel ruling stating that all the school had to do to fulfill its legal responsibilities is to show “merely more than de minimis” progress. 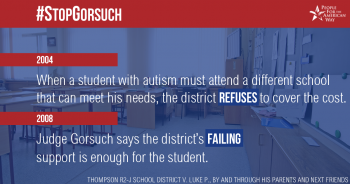 Today, the Supreme Court didn’t just reject this interpretation of a key law protecting children with disabilities—it did so unanimously. In a similar case raising the same issue, Endrew v. Douglas County School District, the justices ruled 8-0 that the law requires more than just the low bar that Gorsuch set for Luke’s school. The Court was clear in stating what should have been obvious:

When all is said and done, a student offered an educational program providing “merely more than de minimis” progress from year to year can hardly be said to have been offered an education at all. For children with disabilities, receiving instruction that aims so low would be tantamount to sitting idly . . . awaiting the time when they were old enough to drop out. The IDEA [Individuals with Disabilities Education Act] demands more. (internal citations and quotations removed)