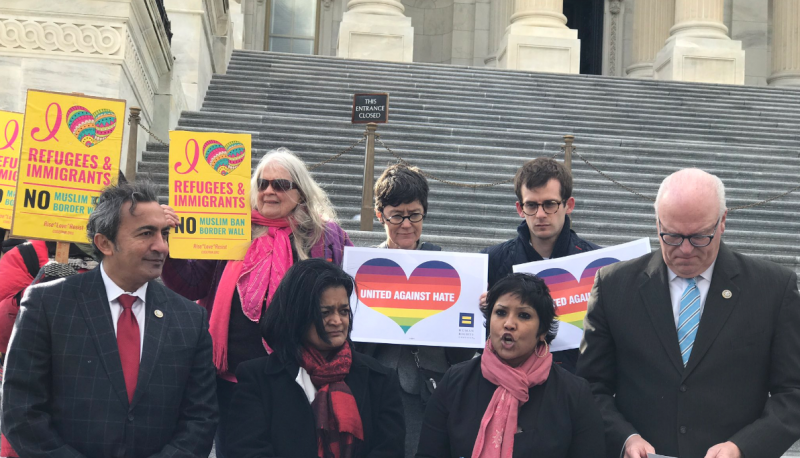 Religious liberty is a fundamental American value that has been consistently undermined by right-wing extremists, including the president of the United States, who want to discriminate against minority religious groups. In the wake of Donald Trump’s campaign and election, we have seen a burst of hate crimes against religious minorities, especially those targeting Muslim and Jewish communities. As “mainstream” conservative leaders have built alliances with activists explicitly or implicitly advocating for white nationalism, minority religious communities are being targeted for vandalism, harassment, and violence. The rising aggression aimed at Muslim and Jewish communities, and others like Sikhs who are sometimes mistakenly perceived and targeted as Muslims, is a direct threat to the principle of religious liberty, and we should be aggressive in challenging that threat as a gross violation of our core American values.

Following the injunction against his previous executive order banning Muslims, Trump signed another order this Monday which contained the same substance with superficial tweaks designed to help the action pass legal muster. Just like the previous order, this one’s intent is clear: The order singles out six majority-Muslim countries, and—while the order details individual and non-religious reasons to restrict travel for individuals from each country listed—the Trump team sent out an email the same day stating that the order was designed to prevent “radical Islamic terrorism.” This allegedly diluted order is intended to make good on Trump’s discriminatory campaign promise to bar any Muslim person from coming to the U.S.

After carefully devising a new EO, the Trump team sends out a campaign email highlighting the ban’s aim at “radical Islamic terrorism.” pic.twitter.com/AQu1M2PV13

During his campaign, Trump relied on Islamophobic rhetoric and has surrounded himself with advisors, like Steve Bannon and Stephen Miller, who have well-documented ties with the white nationalist movement. According to the Southern Poverty Law Center (SPLC),anti-Muslim hate groups tripled in the U.S. since Trump’s campaign was launched in 2015. That’s no coincidence. Trump’s anti-Muslim campaign narrative, ultimately coupled with his win, and his anti-Muslim policies have legitimized Islamophobia in the eyes of many of his supporters and created an environment where white nationalists are represented in the White House. In 2015, hate crimes against Muslims rose by a full 67 percent and hate crimes against people of the Jewish faith rose by 9 percent. While devastating, it is no surprise that within 10 days of Trump’s election the SPLC recorded 900 hate crimes. Trump’s election showed the people who bought into his hateful rhetoric that rather than being decried as violent, bigoted ideas could put a man in the highest office in the land.

In 2017 alone, four different mosques in three states have caught fire, and three of those fires are explicitly categorized as arson. And on January 29, a white nationalist terrorist who espoused support for Trump attacked a mosque in Quebec, killing six and wounding eight people. The uptick in large-scale acts of violence towards Muslim individuals and groups is reprehensible. The rhetoric and environment created by the Trump administration has fomented anti-Muslim feeling and created terror for Muslim individuals. Muslim identity in the U.S. is typically viewed through a racialized lens, so we have also seen non-Muslim brown people targeted with acts of hatred. Two Indian men who were shot, one of whom was killed, in a Kansas bar after the white attacker allegedly believed they were from Iran (one of the countries singled out in the travel ban) and yelled “get out of my country.” Rather than immediately decrying this as a hate crime, Trump waited six days to acknowledge the tragedy. It’s clear that changing the atmosphere of hatred toward Muslims that he has helped to create is not at all a priority for the president.

Hatred and violence towards religious minorities has also been directed at the Jewish community. Since January, more than 100 Jewish community centers and schools have received phoned-in bomb threats. Headstones in Jewish cemeteries have been toppled in at least two states—a form of vandalism with roots in the anti-Semitism of 19th century Europe that was heightened in Nazi Germany and has continued as a form of intimidation against Jewish communities. The rise of anti-Semitic hate crimes and vandalism, like the rise in Islamophobia, can be traced back to the Trump campaign and subsequent administration. Both Miller and Bannon, Trump advisors, have ties to white supremacists, and the administration has been cheered by members of the self-named “Alt-Right,” a movement that is an attempted rebranding of white nationalism.  It is absolutely unsurprising that with these people in power—and with the “Alt-Right” and KKK, among others, celebrating Trump’s victory, and with people like Bannon and Miller helping run the White House—that anti-Semitic individuals and organizations would feel emboldened to harass Jewish community centers and schools.

Just this week another wave of bomb threats hit Jewish community centers, the sixth time this year that multiple Jewish schools and centers have been targeted. While Trump did mention the threats in his speech to a joint session of Congress, he has been slow to take real action to address these threats to the Jewish community. It is absolutely abhorrent to see communities terrorized by threats targeting their children, particularly without the promise of additional protections.

Just as building “the wall” and enacting Muslim bans are Trump’s policy-oriented ways of telling some people that they don’t belong here, actions that spur terror in the individuals who practice (or are perceived to practice) these religions are sending the same message. Living in fear actively disrupts people’s lives and makes them feel unwelcome in the country in which they live. Counter to our founding values of religious liberty and acceptance, the people who are intimidating minority religious communities are acting in a fundamentally un-American manner. At People For the American Way, we fight in opposition to the harassment and intimidation of Jewish and Muslim communities and individuals. This is why we have signed on to a letter with the Leadership Conference on Civil and Human Rights that details additional instances of aggression against marginalized communities and calls on the executive branch for stronger responses to hate crimes. It is appalling to see the administration and white nationalist groups cultivate hatred against these communities, and we will continue to work for safety and religious freedom for all people.