What the Anti-Birth Control Movement is Really About

99 percent of American women who have ever been sexually active have used birth control.

65 percent of Americans think that insurance plans should have to cover contraception.

Yet the leaders of the GOP, in an effort to make it harder for women to obtain birth control, have sided with a splinter faction of the Right that wants to allow any employer to prevent any employee from privately obtaining contraception coverage from their insurance provider.

Why are they so out of touch? Why have the leaders of a major party staked out a position on contraception to the right of 57 percent of American Catholics and an even greater percentage of the population as a whole?

Here’s a picture of a panel gathered by the House GOP for a hearing about the issue: 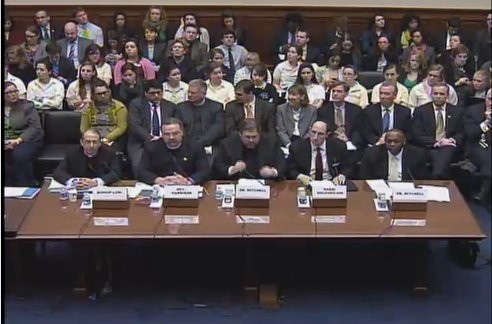 In Virginia yesterday, the state House GOP pushed through a bill mandating that women seeking abortions undergo a medically unnecessary vaginal probe without their consent. The governor, a top contender for the GOP vice presidential nomination, has said he will sign it.

This is no longer about religious liberty for institutions that preach against contraception. This isn’t about women’s safety. This is about who gets to make the decisions controlling women’s bodies.

And for the GOP right now, that isn’t women.