What This Week’s Events, Including Indictments, Tell Us About Trump’s Judicial Nominations - People For the American Way
Skip to main content

What This Week’s Events, Including Indictments, Tell Us About Trump’s Judicial Nominations 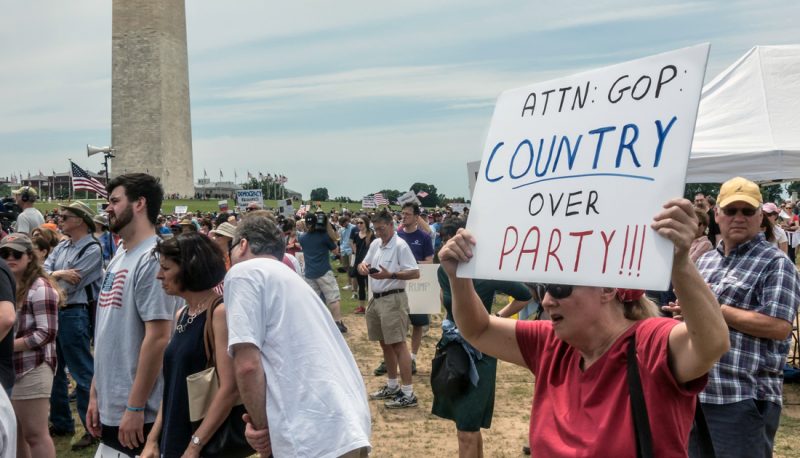 Country Over Party sign at the March for Truth rally near Washington Monument. listening to speakers calling for investigation of Donald Trump's collusion with Russia.

This piece was originally published on HuffPost.

By any standard, it’s been a very eventful week in our nation’s capital. But significant developments that may not seem related—including action on the Senate floor and in the Judiciary Committee, as well as indictments revealed by Special Counsel Robert Mueller—send an important message about the critical responsibility of the Senate to truly vet President Trump’s nominees to the federal judiciary. They also highlight the need for the public demand such vetting by Republicans as well as Democrats in the Senate.

In what will likely be only the first charges brought by Mueller, Monday saw the revelation of indictments against former Trump campaign chair Paul Manafort and his de facto deputy Rick Gates. This indictment doesn’t refer to work on the Trump campaign, but focuses instead on the pair’s work for Ukraine as foreign lobbyists without obeying disclosure requirements, improperly laundering millions of dollars in payments through corporations and foreign bank accounts, and related misconduct from 2006 through 2015.

These charges, along with the many others likely to come, will be decided in trials presided over by federal judges. It is crucial that these judges, as well as those who hear challenges to Trump’s actions on issues like immigration and the environment, be truly impartial and independent, as opposed to deferring to presidential assertions of power. And on top of concern already raised about Trump’s deference to the right-wing Heritage Foundation and Federalist Society in picking judicial nominees, the indictments “cast fresh doubts” on Trump’s judgment in making selections for these and other key posts.

Fortunately, under our Constitution, deciding who should hold lifetime posts as federal judges is not the president’s job alone. The Constitution specifically states that the Senate must provide “advice and consent” on presidential nominations to the judiciary, making it the Senate’s responsibility to decide whether to approve or reject them. This week’s events underline how important that Senate role is.

But this week’s events also unfortunately show that the Republican-controlled Senate is not doing the vetting that it should be doing of Trump’s judicial nominations. On the Senate floor, Republicans pushed through four Trump nominations to the critical federal courts of appeals, just one level below the Supreme Court. With votes on all four nominees in only three days, some just days after their approval in the Senate Judiciary Committee, there was little if any time for serious consideration of their records. This is despite the fact that one has a very troubling record on deferring to presidential assertions of power, claiming that a presidential signing statement could justify a president in refusing to obey a law banning torture, and several have extremely troubling records on workers’ rights, LGBTQ rights, reproductive justice, and other areas. This means that the Senate has confirmed eight appellate courts judges in Trump’s first nine months in office, significantly more quickly than under Presidents Bush or Obama. In fact, only one of President Obama’s appellate court nominees was confirmed by October 29 of his first year in office.

Equally troubling developments occurred this week in the Senate Judiciary Committee. Although that Committee is supposed to carefully review each of a president’s judicial nominees, in their rush to judgment they gave short shrift to the traditional rating of judicial nominees by the American Bar Association.

Since 1953 when President Eisenhower requested it, the ABA’s Standing Committee on the Federal Judiciary has reviewed the professional competence, integrity, and judicial temperament of judicial nominees, based on consideration of their records and interviews with lawyers personally familiar with their work. Both Republican and Democratic administrations had generally solicited this advice before making a nomination, and the ABA had rated most potential nominees, whether conservative or progressive, as at least “qualified.”

Not only is the Trump administration not asking for ABA ratings before it makes a final decision on nominations, but the Republican-controlled Senate Judiciary Committee is also effectively disregarding such ratings when they are made, especially if they are critical. On Thursday, the committee voted on party lines to approve two nominations before the ABA had even been able to complete its evaluation. Rejecting a specific request by ranking member Diane Feinstein, committee chair Chuck Grassley made clear that he would not wait for the review by what he derisively termed this “outside group.”

In yet another slight of the ABA’s work, a few days earlier, the ABA announced that it had unanimously rated a Trump nominee for the Eighth Circuit, Steven Grasz, as “not qualified”—only the third time in almost 30 years that such a rating has been agreed upon not just by a majority, but unanimously. Historically, when majority “not qualified” ratings have been made, the committee would set its schedule so that both the nominee and the ABA panel could appear at the same hearing. But the Republican-controlled committee went ahead with a hearing for Grasz on Wednesday (a week before the ABA will be able to testify), and spent much of the time criticizing the ABA. This was despite the extremely troubling ABA review, as emphasized by Democrats on the committee, including the ABA’s conclusion that Grasz was “gratuitously rude,” had “temperament issues, particularly bias and lack of open-mindedness,” and would be “unable to separate his role as an advocate from that of a judge.” While not mentioning this episode specifically, it was no coincidence that Senator Whitehouse this week criticized what he called the “sham of judiciary nomination hearings.”

President Trump himself recognized this week that federal courts are “rapidly changing” as a result of his nominations and that the Republican-controlled Senate is approving those nominations “at a record clip.” But pushed by right-wing groups, a number of Republican senators are dishonestly claiming the exact opposite and seeking rules and other changes that would further speed up the pace of Senate confirmations. The objective is all too clear. Frustrated by federal judges (appointed by Republicans and Democrats alike) who have ruled against Trump’s actions on immigration, treatment of LGBTQ individuals, and other areas, and unable to advance Trump’s agenda in Congress, the administration and its supporters are trying to rapidly fill the federal bench with lifetime appointees who will “rubberstamp his overreach.”

For the sake of our democracy and all of our rights, this must stop. Republican senators, some of whom have been willing to oppose a few Trump initiatives like on health care, must truly do their jobs and take the time needed to thoroughly vet and honestly evaluate and vote on Trump judicial nominees. And the American people must demand that both Republican and Democratic senators do just that.