Where are the Women in the Federal Courts? - People For the American Way
Skip to main content

Where are the Women in the Federal Courts?

An ally just sent along this graph showing the progress of women in the federal judiciary over the past 10 years. What’s alarming about it is that, in terms of numbers, there has been very little progress at all: 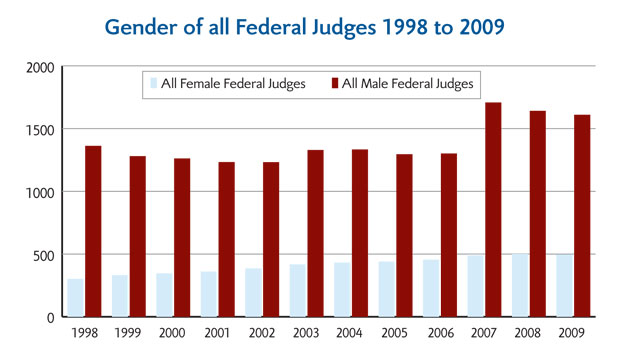 President Obama’s judicial nominees have been the most diverse group in history. 44% of his nominees are women—twice as many as were nominated under George W. Bush. And 42% of his nominees are African American, Hispanic, or Asian American. But President Obama’s nominees, as diverse a group as they are, just aren’t making it to the courts. Instead, they’ve run into a concerted Republican effort to block every possible judicial nomination, no matter how uncontroversial. This filibuster campaign is not only creating personnel emergencies in courts across the country—it’s stopping qualified women and minorities from bringing a much-needed diversity of experience to the federal bench.