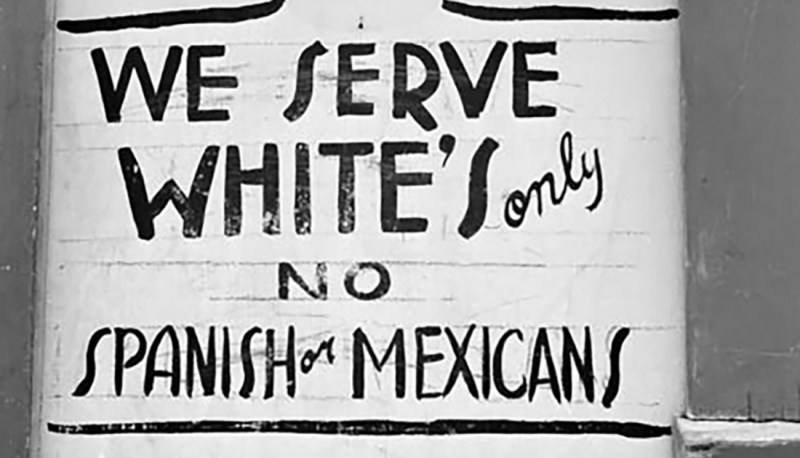 Before he opened fire at a Walmart in El Paso, Texas on August 3 and killed 22 people in a hate-fueled massacre, the gunman posted a screed online that reportedly stated his motive: “This is an attack in response to the Hispanic invasion of Texas.”

In response, thousands of Americans shared their devastation and outrage over the shooting, which many said marked a new low in the Trump era. And while it’s true that Trump deserves ire for his anti-Latino rhetoric and incitements of violence, this attack — and the gunman’s fear over the “Hispanic invasion” — isn’t just about Trump’s racism or his cruel anti-immigrant policies. It’s also about the centuries of anti-Latino and white supremacist violence in America’s journey toward greatness, especially in Texas.

Accounting for Texas’ long history of anti-Latino racism situates today’s violent cruelty — both at the hands of the government and white supremacist terrorists — and contextualizes the El Paso massacre, the mass detention of immigrants at our borders, the 77 white supremacist groups in Texas, and fear over the “Hispanic invasion” as more than just a byproduct of the Trump era.

Far from the usual tropes of heroism, liberty and freedom that are typically associated with the American frontier, Texas’ fight for independence was instead sparked by American settlers’ racist desire to legalize slavery in a territory owned by Mexico, which had already abolished the practice. But the white supremacist terrorization of people of Mexican descent, under the guise of law and order in America’s fulfillment of Manifest Destiny, is just as central to the state’s history — and to our country’s legacy of anti-Latino racism.

White supremacist hate against Latinos was a common thread that spanned from those celebrated as war “heroes” to lauded American artists and writers. For example, Sam Houston, who fought at the Battle of the Alamo with Davy Crockett, asserted that white people would never “mix with the phlegm of the indolent Mexicans, no matter how long we live among them.” Although he later changed his views, even Walt Whitman once expressed a similar sentiment: “What has miserable, inefficient Mexico — with her superstition, her burlesque upon freedom, her actual tyranny by the few over the many — what has she to do with the great mission of peopling the new world with a noble race?”

In the aftermath of the Mexican American war, the anti-Latino violence that continued to dominate Texas became state-sanctioned as it seeped into federal policies. During the early 20th century, Mexican citizens began to migrate into the U.S. to seek refuge from the Mexican Revolution’s violence and turmoil. In response, the U.S. sent Texas Rangers and Army soldiers to the border and erected electrically-charged barbed-wire fences to keep immigrants out. Thousands of Mexican-Americans were lynched, burned alive and brutally murdered by local ranchers, vigilante mobs, and Texas Rangers and Army soldiers. “Juan Crow” laws codified discrimination against Latinos in voting, employment, housing, education, housing and other key areas of life. And in the 1950s, President Eisenhower’s “Operation Wetback” deported as many as 1.3 million immigrants, including 25 percent of all immigrants in Texas. There, they were deported back to Mexico in overcrowded boats that were later compared to slave ships.

In the 21st century, anti-Latino, anti-immigrant hate found its way into emerging national security plans after 9/11 when the U.S. expanded the existing border wall between the U.S. and Mexico and created ICE to “strengthen public safety.” A few years later, the emergence of the Republican Tea Party pushed the same fear of “the Hispanic invasion” to justify the same racial hostility their forefathers had. Until their white supremacist views became more mainstream within the Republican Party, they were described as a fringe group.

These historical events have been well-documented by academics and researchers on racial violence at the Texas border. But in light of the bloody massacre in El Paso, we must recognize that the centuries-old legacy of anti-Latino violence in our country is white supremacist terrorism. It’s white supremacy that governed the appropriation of Mexican land and subjugation of its rightful owners. And it’s white supremacy that justifies the terrorization of Latinos that continues to this day.

The rhetoric Trump uses today to justify his cruelty — that immigrants are “invading” our country and bringing third-world diseases, that they are violent rapists and thugs, that they deserve to be shot — is toxic, no doubt. And he deserves to be held accountable for enabling such acts. But as we rebuke the hate that caused 22 El Pasoans to die, and as we renew our commitment to a truly safe, just and equitable future, Americans must reckon with a broader truth: anti-Latino terrorism has always been a part of our country.