Who is Brett Kavanaugh? - People For the American Way
Skip to main content

Who is Brett Kavanaugh? 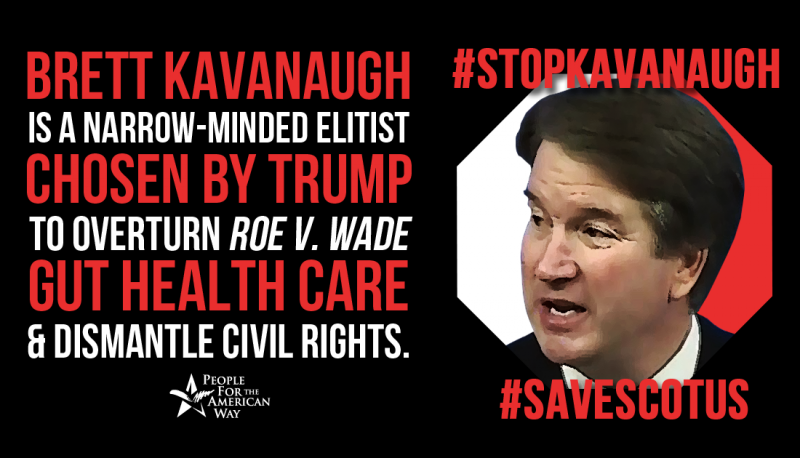 Even before Kavanaugh’s name was revealed, Donald Trump made clear exactly what we’d be getting. He repeatedly bragged about his shortlist of potential nominees, cherry-picked and vetted by far right legal organizations the Federalist Society and Heritage Foundation based on the litmus tests Trump laid out during the campaign: a commitment to overturning Roe v. Wade and to undermining the Affordable Care Act.

Indeed, Kavanaugh’s record on reproductive freedom clarifies the kinds of decisions he would make regarding Roe on the bench if he was confirmed. Just last year, he blocked a 17-year old immigrant’s request for an abortion in the now-infamous Jane Doe case, only to be overruled by the full DC Circuit. Beyond such disturbing views on choice, he has ruled against the ACA, workers, consumers, and the environment—and is in favor of unlimited executive power. Here are a few essential need-to-know facts about Brett Kavanaugh that make clear just how extreme he is — and the lasting damage he could do if confirmed to a lifetime seat on the nation’s highest court.

Judge Kavanaugh’s record is proof positive that he was nominated specifically because he would continue to advance the Right’s extreme agenda. And with his nomination, Trump and his allies are inching closer to cementing a Court majority dramatically to the right of what Americans want or deserve.

In short, Kavanaugh is yet another narrow-minded elitist whose favors the interests of the wealthy and powerful over the rights of all Americans. It’s time to stand up and fight to make clear that we can’t afford Brett Kavanaugh on the Supreme Court.